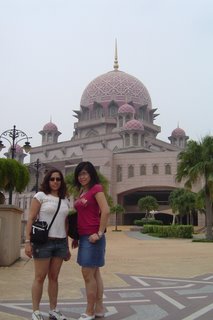 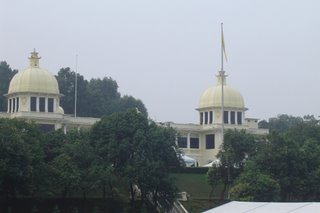 completely offline, touring around Kuala Lumpur and Penang, Malaysia. KL is an amazing city; just the feel of it was so much more real than Singapore (hang onto your purses ladies!). Sure, Singapore is much cleaner, more business like...but KL had the greenery, dirtier streets, night markets and a more apparent local culture. Some places didn't even have real toilets, I waited 20 minutes for the one stall...not quite that brave! 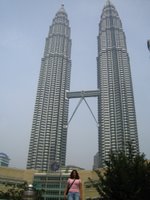 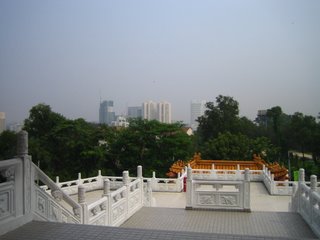 Joanne and I met a Buddhist taxi driver "Uncle" who really showed us around for two days.The best part wasn't the touristy places he showed us, but the amount I learned of the culture from him. Even his apologetic but sincere assurance that we should look for a Chinese taxi driver was helpful...apparently the Indian drivers have a history of drinking on the job. Joanne assured him that I wouldn't be too offended, as I'm the Indian version of what they call "bananas" in Chinese (white on the inside)....lol!!

We ate mostly at hawker centres, sometimes in Western places, where, surprisingly, I found a much larger variety of vegetarian food :) Possibly because there are quite a few buddhists in country. Finding a vegetarian sandwich, and people that understood the concept of substitution was refreshing! I've got to say, despite the Singapore tourism board's assurance that this is a land of smiles, service is MUCH better in Malaysia. 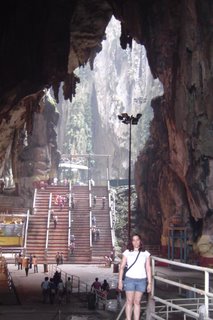 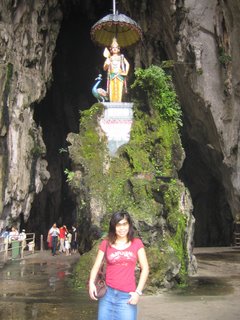 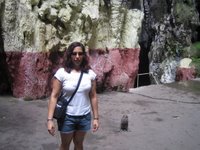 The Batu Caves in KL are really a unique site; A Hindu temple and art gallery within a cave; statues, artwork, stories (unfortunately written in Urdo). I'll let the pictures do the place justice. I 've never seen so many monkeys! Mischievious for sure; Curious George wasn't called curious for nothing! They're also not shy about when and where they have sex...although really quick and easy to miss, this is quite the show for us tourists! 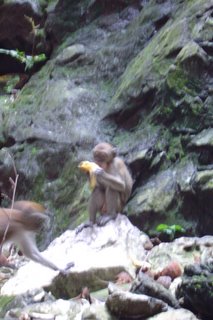 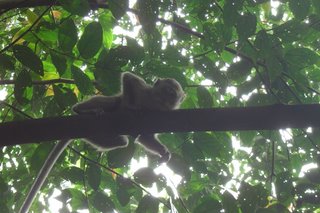 Maybe the most interesting part of KL was walking through Chinese temples. So...calming. Like you can feel a calming presence, acceptance, despite feeling no religious association at all. Watching people light candles, light josh (incense) sticks and pray with them,marveling at the art work, breathing in the smoky air. We made a prayer, held fortune sticks, and dropped them into the pot; the one stick that lands higher than the others corresponds to a number. The number corresponds to one of over 40 boxes, and the box contains a fortune. As you know, I am not the religious type by any means, but was it simply coincidence that every temple I visited gave me a fortune along similar lines? 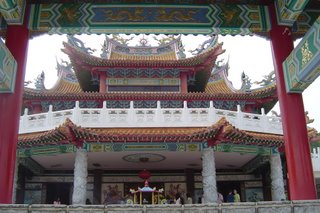 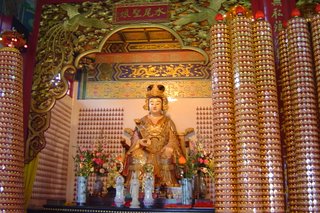 Temples, mosques, churches, a beautiful city called Putrajaya, outside of KL...if I were to describe them all, this entry would be enormous. Not to worry, the slideshow below (COMING SOON) will likely give you a good overview; I promise to post descriptions on my Flickr in two or three days. (I'm working some overtime for work, so be patient please!) Again, click on the left-hand side Flickr badge to view more pics.
Posted by Sapna at 10:29 AM
Email ThisBlogThis!Share to TwitterShare to FacebookShare to Pinterest

4Wheels and a WingNut said...

Ok, well you're gone now... so I can't directly comment about things over msn:P hope you get these!!!

But my God, all the places you've been travelling is freakin overwhelming o.o and then the pictures! I soooo want to travel like you