We were total tourists today, checking out Sentosa Island. A tiny beach, really, a few cruise ships, some boats...and oil ships. Not really water you want to swim in, although there are a whole lot of fun, touristy, things to do on the island. And no, despite our best efforts, we have not yet found the monkeys that supposedly roam freely. 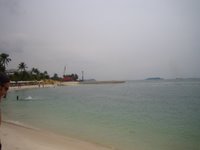 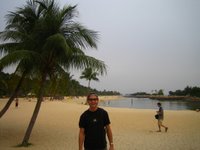 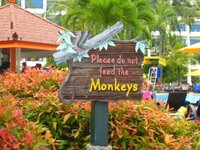 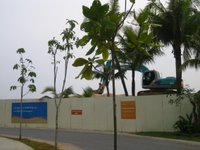 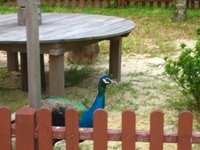 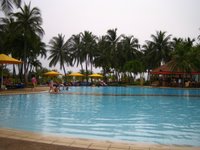 The locals joke that it's Singapore's "imported" beach. From the top of the cable car, you can see why...looks like they handpicked the beach, and carefully placed it into the ocean! It's not really natural with sand imported from Australia. Check out the construction crane behind the palm trees!
We decided to hang out at the resort pool instead. Watched a classic "wrestling" game for the kids on the resort...last kid standing wins! 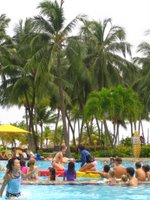 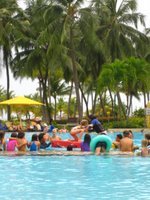 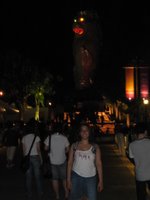 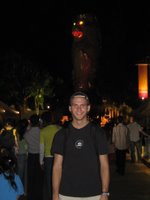 Probably the most touristy show on the itinerary, the "Magical Light Show" was actually cool; they had animations, lights, fountains, and fire all together. Check out the creepy eyed Merlion, with lit-up eyes, behind us. 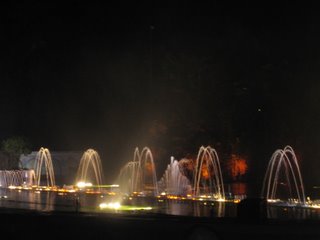 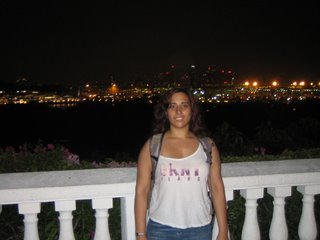 One thing the tour books miss though...if you're here, you have got to do "The Luge". Kinda like a go-kart, but goes waaaaay faster; you control the speed and steer. There's a reason they give you helmets!
Posted by Sapna at 6:09 PM
Email ThisBlogThis!Share to TwitterShare to FacebookShare to Pinterest