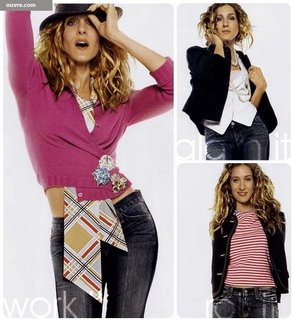 You won't find your beloved show here in Singapore. Seeing as Hall 11 at NTU has only one tv, which has only one working channel, I am completely clueless in tv world, and will be for the while. (I miss Prison Break!!) However, an Australian colleague couldn't find the show on tv. Naturally, DVD's are the next best thing, so she looked for the Sex & the City DVD set at the HMV on Orchard Road --the most touristy, non-Singaporean part of town. The response she got "We don't sell that in Singapore; it's censored". . Which lead me to think, what else is censored in Singapore?

Reporters without Borders ranked Singapore 140th out of 167 countries for freedom of the press; here's a handful of censored items:

So, like most shoppers looking for DVDs, clothes, gum, or real newspapers, my Australian co-worker went to KL--where she found the real, legitimate ENTIRE DVD set (yes, all 6 seasons, all 94 episodes, almost 50 hours of tv) cost $300 SGD. Might have to head to that movie store before I leave!

Posted by Sapna at 1:59 AM
Email ThisBlogThis!Share to TwitterShare to FacebookShare to Pinterest