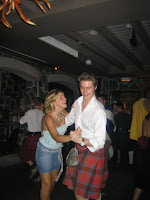 Last night was a ton of fun at The Highlander, Singapore's Scottish pub (yeah I know, a Scottish pub in Singapore?!). Very Scottish, with tons of Scots (or wannabes...)

It started with Monday night's effort to show Sean & Jens how empty the campus bar is; ironically, it's named the "Staff Club". Locals, in fact, have no idea it exists; those that do think it closes at 10:00 pm and take you in circles when you ask for directions. Instead of an empty bar, we stumbled upon Dave's Scottish b'day party. About 20 exchange students at NTU, mostly from Europe and Australia were the only ones drinking in the bar. After a night of watching crazy karaoke, we met an interesting mix of friends studying at uni. 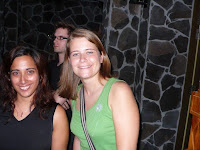 Dave's real celebration last night included kilts, traditional Scottish dancing, a limbo contest, and kisses for the birthday boy...fun times! Definitely not ready to stop being a student. I can honestly say I liked the beer too---"Heather Ale", made from some kind of wheat! 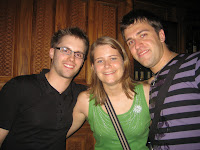 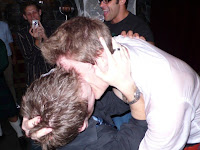 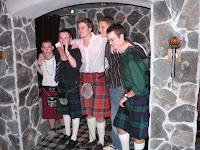 Posted by Sapna at 2:45 AM
Email ThisBlogThis!Share to TwitterShare to FacebookShare to Pinterest