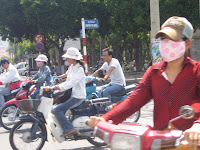 Originally a part of Cambodia, annexed by the Vietnamese, conquered in the 1800's by the French, and later bombarded in the Vietnam War against the Americans, Saigon is an eclectic mix of culture and history. Not to mention tangled telephone wires, random street stalls and curiously smiling people that reminded me of the Thais. Definitely more Asian than any city I've visited yet, Ho Chi Minh City (known to most as Saigon) was a refreshing break from Singapore's spotless streets.

Entering the city's horrendous traffic becomes almost laughable after two days...weaving in and out of cars and motorbikes is routine. In fact, if you cross the street in a straight line, stop and wait for traffic, your chances of survival are minimal! Instead, walk straight into the motorbikes (not the cars) and let them weave their way around you. Yes, that's right...into the traffic, 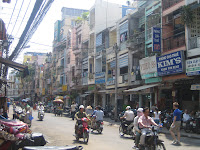 across the traffic circle, on the sidewalk--they will find their way around you. Becomes quite convenient actually---ah the randomness of Saigon; don't think, just go!

Outside the city, we took tours of the Cu Chi tunnels, crawled through 90 metres of a tiny war tunnel the Vietnamese people can squeeze into, (widened for us tourists!), and gawked at the brutal war weapons (and the war veteran's enthusiastic proclamation to a spear studded enemy trap "This one's my favorite!"). The War Remnants museum was a great collection of photographs of the effects and aftermath of the tragedy dubbed the "American War" by the Vietnamese.

Sunday we fell into the tourist trap; River tour down the Mekong River. While the river canoes and rowboats rowed by locals wearing Vietnamese hats were an interesting experience; the touristy island hopping to local candy shops every few minutes was a bit annoying. Spent our precious last night there enjoying ridiculously cheap drinks and dining at Underground Saigon bar and Highlander Cafe.

Check out the slide show below for pics and more comments on our Saigon Adventure! Note: Some non original pics may be a bit blurry...also there's a lot of pics so you may want to set the slideshow to fast! (top R.H. corner)

Posted by Sapna at 5:15 PM
Email ThisBlogThis!Share to TwitterShare to FacebookShare to Pinterest