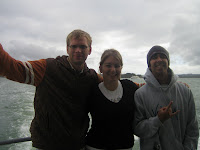 Our last few days in the North Island were spent at the Bay of Islands, a popular summer destination way up North. Since it's winter, as you can imagine, it's a bit rainy! Still had a great time as a backpacker team of four--A Canadian, a British, a Dutch, and a Hawaiian. We spent a couple nights in a bar, a day viewing the beautiful (but windy) Cape Reinga, a couple hours in a Fireman's pool hall (thanks to some drunken volunteer firemen!) and an afternoon on Russell Island...
Top: Goos, Cherry & Joel on Russell Island 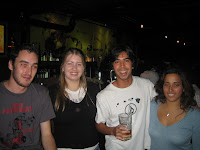 Cherry, Joel and I headed back into rainy Auckland for a night...and bumped into some of the Kiwi Crew one last time at Globe Bar. Got a bit lost in a rainstorm, waited for 2 buses, broke an expensive bottle of wine (gift), and rushed back to our accommodation in time for photo uploading and a few hours of sleep. Off to Syndey next, but definitely going to miss New Zealand's beauty. Goodbye New Zealand, I'll definitely be back!