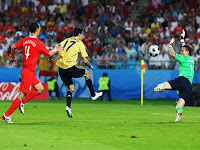 Football may just be the craziest thing about Europe, at least every second summer! We just happened to be in Vienna for the Germany-Turkey Euro 2008 semi-finals, and there could not have been a better place to be. Camille and I arrived at the Fanzone Wien two hours early, just barely enough time to snag food, an $8 beer each, and a $6 bucket of popcorn, before the crowds poured in. Not to mention a seat on the bench under the Mastercard shelter--which was great for standing on to see the giant screens fixed to the cathedral walls. 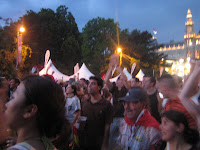 Towards the middle of the game, a hail warning sign flashed on the big screen, which seemed laughable after our warm weather Wednesday afternoon. "Follow instructions of the security guards" they warned us. The game continued as usual until the 70 minute mark--usual being screaming fans dressed in German or Turkish flags. That's when the worst storm in Vienna in a decade hit---powerful wind, pouring rain, hail and blinding lightning.

Our previously spacious Mastercard shelter became packed as everyone huddled together to wait the storm out. You'll have to use your imagination here...it was too wet for pictures!!!
Absolutely drenched, we were pushed out half an hour later by dressed up guards, complete with ambush-like helmets. The train ride home smelled "like wet humans" according to Camille, and added to our adventure through the unexplained lock down at one station. Soaking wet, we returned to the hotel and prepared for another half day in Vienna, with Tobi (yes, another Singapore mini reunion!) As the Germans say, "man sieht sich immer zwei Mal im Leben!"
Posted by Sapna at 12:24 AM
Email ThisBlogThis!Share to TwitterShare to FacebookShare to Pinterest