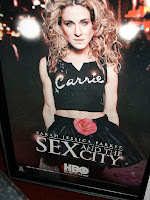 Carrie Bradshaw has become a known name in popular culture over the past 6 years...and to tribute the debut of the most anticipated romantic comedy ever, we are holding a few marathon martini nights and then heading to the theater (albeit a week after most).

Our first night consisted of an introduction and mad-dash in which Stephanie and I tried to shuffle through DVD's to find the most crucial episodes to give to Sheena, a Sex & the City virgin. Never having seen a single episode, we started her off with the classic first 30-something birthday party episode and progressed to the episodes just before Aiden's arrival into Carrie's life.

Perhaps the most entertaining part of the night though (after a delicious Italian meal at Fiore's Cantina, just steps away from my apartment)...was our search for ice. That's right, after carefully selecting the Cosmopolitan ingredients and martini shaker from my list (flavoured vodka, lime juice, low-calorie cranberry juice and all) I had neglected to fill the ice trays. 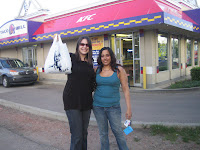 After this discovery, us three girls walked up to the KFC Manager, out near the Whyte Ave store on his smoke break, and asked to fill a couple cups, with ice. This suddenly turned into three cups of ice, and then a bag of ice...which the manager had one of the employees fill for us, for free, from the bags of ice at the back of the store. And here we were, thinking we'd have to sneak cups of ice from KFC's pop machine! Three girls flaunted off, bag of ice in hand, Sex & the City style. 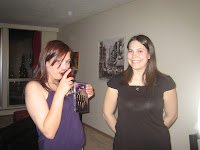 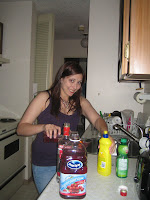 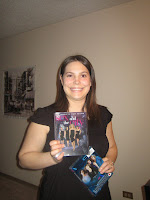 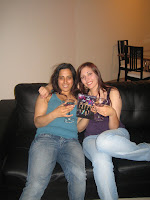 Episodes later, we are still shuffling, struggling to pick our favorites from what may be tv's most original comedy targeted towards women. Our plan is another afternoon of episodes and girl talk...and then a night out on the town with Cosmos in hand!
Posted by Sapna at 6:29 AM
Email ThisBlogThis!Share to TwitterShare to FacebookShare to Pinterest