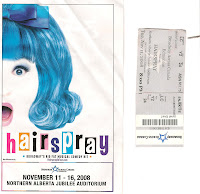 After Sheena, Christine and I attended The Lion King's Broadway in Canada preview cocktail party, right here in e-town, I decided to venture into Broadway plays as a form of entertainment. My closest attempts before this November were A Midsummer Night's Dream in London, and a really really close chance to see Chicago in New York last December (another 2 hours in line just wasn't worth it, with 4 days to see the entire city).


So, thanks to Sheena's aunt, we got tickets to the cocktail party, inc 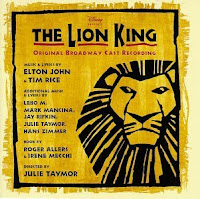 lusive of yummy little appetizers, high class wine, and coffee and Bailey's at the conclusion of their sales pitch. The preview included a couple of the actors in costume, their songs, and a short video of how they made the costumes...we can't wait to go in July!

A week later, Stephanie W and I went to see Hairspray, an interesting take on the 60's, racism, and teen pop culture. While it was highly entertaining, I have to admit I like John Travolta's movie version better!
Posted by Sapna at 3:58 AM
Email ThisBlogThis!Share to TwitterShare to FacebookShare to Pinterest