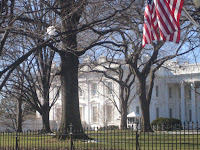 A conference in Washington turned into a great weekend of sightseeing in Obama's new hometown. Cool, brisk and right on the Potomac River, this city was a refreshing spring take on February.

While the Whitehouse was closed for tours, we still took the obligatory tourist snapshots outside the Capitol and government grounds. One thing definitely not lacking in Washington: cop cars and cabs. Even as I stepped slightly over the "Hard Hat Only" area for a split second (the area was previously set up for the inauguration), my coworkers viewed police radioing action right behind me. As I stepped back over the line, the radios stopped. Talk about security!

This trip was mostly business, a Sunday walking around Georgetown was the perfect beginning to the conference. We even tried to catch a local bus and subway, which lead us from our 5 star resort to a slighty creepier part of town! Great shopping in Georgetown though and, great weather in February!

Not to mention our random adventure to an Ethiopian restaurant, Darka I think it was called (yikes forgotten the name already!) Right in Adam's Morgan area, where the local cabbies tell you to go. Madam's Organ, the bar in Adam's Morgan, was a great hangout for the night as well.


A definite "don't miss" was the Smithsonian Air & Space museum, where the original Wright Brothers plane still stands, and you can taste a bite of freeze dried astronaut icecream. Check out the slideshow below (facebook users click "view original post" to get to my site) for a few highlights.

Posted by Sapna at 4:26 PM
Email ThisBlogThis!Share to TwitterShare to FacebookShare to Pinterest