Inka History: The Story of Juanita, & A Beautiful Monastery 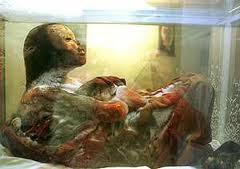 Inka culture began to come alive today, as we learned the story of Juanita, a twelve year old Inca girl whose mummified body German archaelogist Johan Reinhard found in 1995, at the top of a high mountain used by the Inka people for sacrifices. Imagine - since pictures are forbidden - the twelve year old trekking for months in shawls and sandals to her fate of death for her god, a sacrifice. With her, only a priest and two other special children, a girl and a boy. Only the best, brightest and most beautiful were chosen for the honour of death for the mountain god. (Thanks to pauseinperu.blogspot.com for the picture above - and good on you for sneaking your camera through!).

Our bus arrived 3 hours late - some variant of Latin Standard Time, a time where "everything is possible" and "maybe, could be" people will show up when they say they will - resulting in a rush around the historical town. Buses of course, leave on time, but never have an arrival hour, so we had a mere seven hours in the city to explore.After learning of Juanita's journey - similar to many girls of her time - we understood the artifacts of the llamas, alpacas and vicugnas, sandals and purses -found on childrens' bodies in the mountains. At the Museo Archaelogico, we saw more examples of pots and offerings, clothing and ritual instruments, musical tributes and fine, hand sewn blankets made by the Inka people. I wish cameras were allowed inside this building, so I could document the journey Juanita went through. I did find a PBS article (click here) that describes her journey. 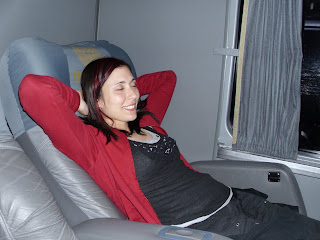 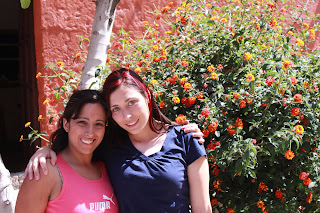 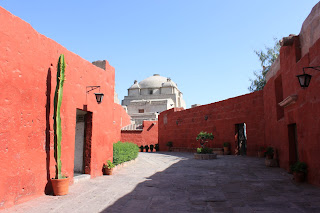 The Universita de Santa Catalina on La Merced, where Juanita's body rests in a frozen, incubated box, was a few minutes away from our hostel - which was safe and had internet (my Graduate Certificate is turning out to be a massive undertaking, and took four of my late nights in Peru, discovery the mystery of learning and teaching a language, in a country whose language I cannot speak). Other than the rock hard pillows and uncomfortable beds, Arequipa was a gem. It did surprise me, however, that I managed to have a three minute conversation with the cab driver (they really speak no English at all!) using my Italian grammar Spanish phrasebook!

Check out the slideshow below for a look at the beautiful Santa Catalina monastery and a glimpse of our experience wandering through the halls where nuns roamed. Facebook users, click here to see pictures! The churhc is a giant complex, most of which is a museum with paintings, 16th century kitchens, cabinets with the nuns' medicines and potions, and beautiful gardens.

Plaza d'Armas, the Main Square, in Arequipa found Stephanie enjoying guinea pig - I use "enjoying" lightly and me attempting again to explain the concept of vegetarian. (Stephanie's description of cui, the local delicacy, is "rubbery chicken with hair" " 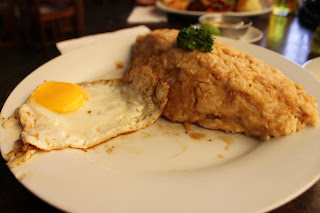 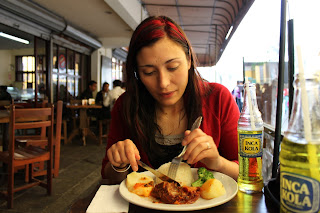 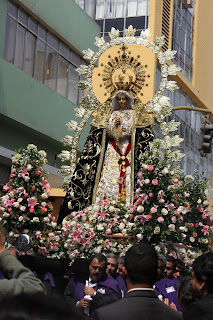 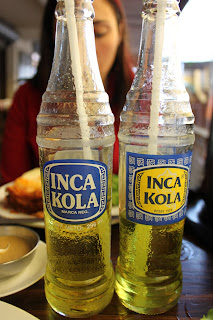 Left: Tribute to the Virgin Mercedes. The locals tribute a different god or goddess every week. Right: Inconsistency of branding of Inca Kola, the only cola in the world that outsells Coca-Cola in its home country.

We ended our day with a sip of Cuzco coffee- a touristy, Starbucks like repreive in Arequipa (but not in Cuzco!). We deicded to be touristy "Americans" and find a Starbucks look alike - and eat the calories we burned racing around the town that day. 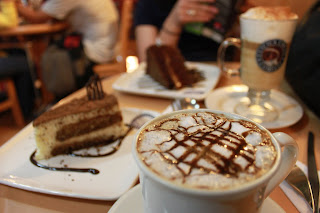 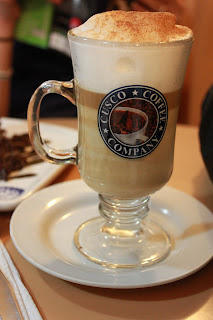 Posted by Sapna at 12:21 AM
Email ThisBlogThis!Share to TwitterShare to FacebookShare to Pinterest