Peru: Backpacker's Paradise in an Inca and Spanish World 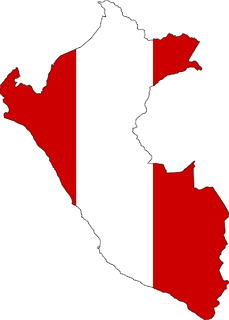 In the early hours of Saturday morning, I stepped onto South American soil for the first time - into the heart of an eclectic mix of Spanish and Inca culture - Lima, Peru. Stephanie's first backpacking adventure - and my first one in 2 and a half years is the crazy, cultural, friendly, thrifty, market infused, rapid Spanish speaking, starving-vegetarian adventure it should be. . I am so happy to return to a backpackers' paradise, a travelling state where reality is only how you live the moment.


Bucky Backpackers is a guesthouse with a warm, friendly, helpful owner and relaxed attitude. Surprised that our oh-so convenient, hostel arranged "airport pickup" cost us 50 soles (we later found it was 25 soles more than it should have been!) - actually cost us more than our 2 night stay in Lima!Although we arrived in Lima well after midnight (thanks to Air Canada's mechanical difficulties on BOTH our flights - anyone actually surprised at their monopolistic enterprises' service? ) we woke up early to enjoy our day. 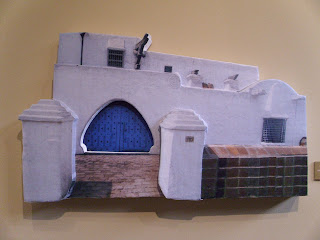 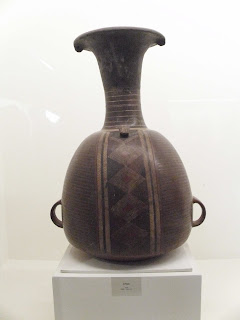 Museo de la Nacion, Lima, Peru
Saturday's tourist rush was an aamazing combination of history, art, culture, sweat, lack of food and amateur photography. Finding out way to Museo de la Nacion was an adventure in itself, as we got tired of waiting for a bus and decided to try the local combis, a tram like bus service. We were met with puzzled looks as we attempted to pay the lady at the back door. She accepted our money but proceeded to ask for our tickets minutes later when she decided it was the right time to check that she had paying passengers. Every two minutes, she'd yell out the destination of the combi "MIRAFLORES! MIRAFLORES!" since the street names printed on the unnumbered vehicles don't always coincide with their actual destination. 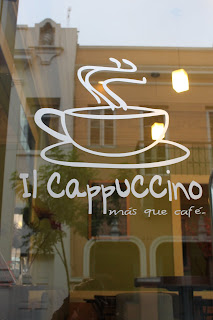 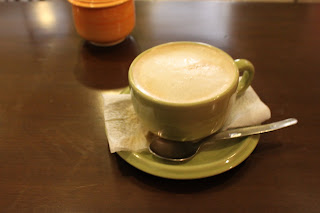 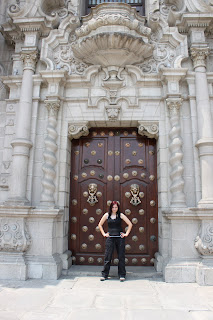 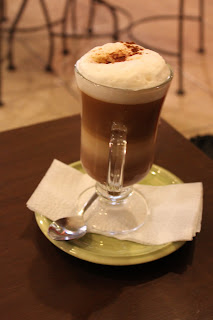 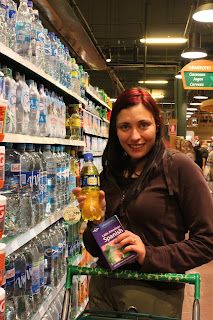 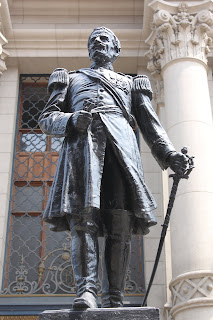 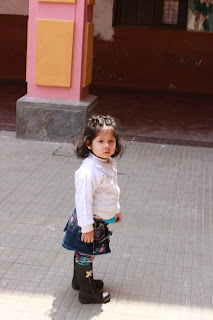 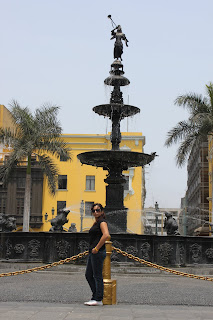 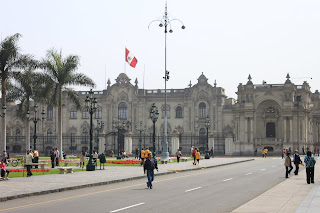 Sapna and Steph's grocery adventure in Vivanda, the local supermarket, using our phrasebooks!
Central Lima, Plaza D'Armas, where we saw locals and the changing of the guard, a 25 minute production that makes other countries' 15 minute shows pale in comparison. 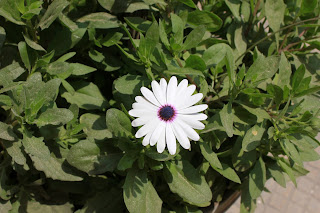 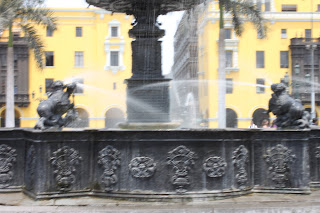 Wandering the local markets that afternon and finding Il Cappuccino in the most touristy part of town and haggling with locals over $2 bracelets, I felt like a backpacker again. Our first drink in Peru was the local version of rum adn coke - at a place called "Jallantas (Tacos, Tapas and More, they claim, although they serve none of the three). It's actually located on Calle de la Pizzas, which is exactly what the restaurant (and every other on the street) serves. We had Paps di Huaincaina, though, our first taste of local food, potatoes and chili sauce. We have to be careful, here, to mention that my form of vegetarianism does not include, "pollo", the Spanish word for chicken! Most comical of all was Stephanie's ingenious idea to wear fake wedding rings, which came i handy to shove away a gentleman who insisted we accompany him to the beach party, rather than return to the hostel. We quickly showed him our rings and he departed. Thank goodness for the very people I'm studying in my Masters course on teaching English, for their phrasebooks... 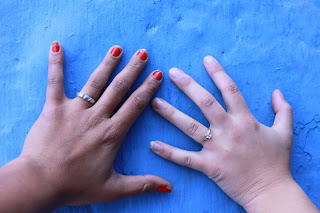 Somos casada!
Iglesia di San Francisco was our next stop, a beautiful church with an informative 30 minute tour of the revered building. An art historian's thriving ground, walking into this building was like entering the 1500's for a glimpse in time, forgetting everything but the beauty of the center nave, the serenity of the chapels and the dark, dark depths of the crypts, complete with rows of skulls. Most intriguing of all was the ancietn library, only available to curators and historians. It contains texts as ancient as the Gregorian chant, from the 14th century months I studied in Music History class. Pictures were forbidden so you'll have to imagine the mystical feeling that comes from standing on original floor (albeit earthquake induced remodelling filled the roof) and breathing in the musty smell of ancient history.
Later, we spent a couple hours at a travel agent, a local Peruvian who had lived in Montreal and was happy to enlighten us on the dangers of our impeding destinations. Deciding against a night bus that would have arrived at 2am in Cuzco, we booked the night bus for that evening (a Cruz del Sur bus more comfortable than an airplane with wifi and more disgusting food), a flight to Arequipa and a buz to Cuzco and then a flight back - a mere $330 all included. Usually that sum is as insignificant as a utility bill - but way to break a backpackers' piggy bank on the second day - and no, no one takes VISA here! 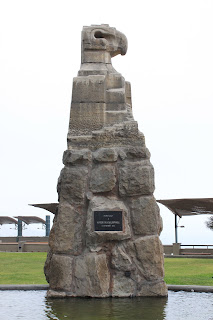 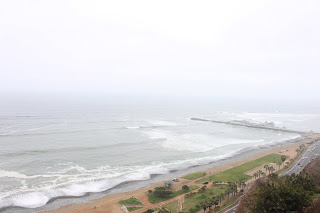 Larcomar, the beach front with shops meant for tourists and ritzy locals
I'm going to cheat and add a few pictures about our last few days in Lima, too, to this post. We stayed at Flying Dog Hostel, which I would recommend to anyone. Our last days were just markets and shops, and a few pics of the beach. Stay tuned for more though - I have 6 more entries about our fabulous adventure. They're written but just need pictures; coming soon! 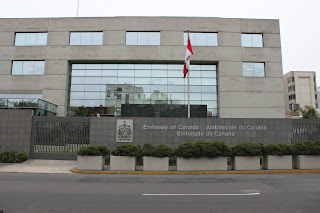 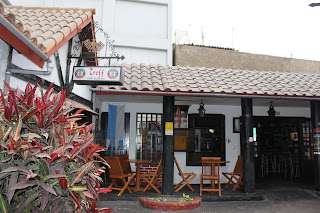 Culture in Lima: The Canadian Embassy that forbid us to take pictures (until we waved our passports at him). Above right, the German bar, Treff, we found when we were checking out alleys to find local markets! Yum, Weisbier! Note: the "S" sign below indicates our hostel was in an "earthquake-safe" zone. 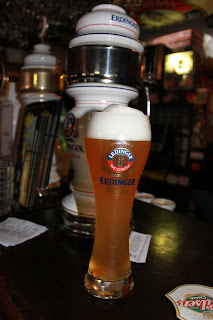 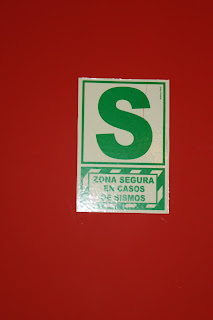 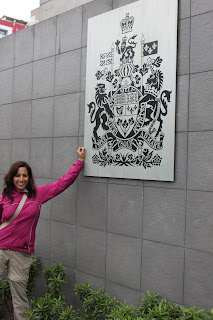 Posted by Sapna at 11:38 PM
Email ThisBlogThis!Share to TwitterShare to FacebookShare to Pinterest