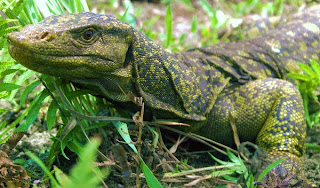 March in a place like e-town is incredibly cold, -36 Celsius in the mornings and -14 for the high in the afternoons. So, to lighten up the damper the weather puts on us all, here is a post on the Singapore Lizard about lizards, in all their warm, beautiful climates!
All photos courtesy of National Geographic

(my macro photography skills way below par, so any geckos I saw in Singapore or Peru are little green blurs on my shots. The photo on my homepage, however, is a real photograph from the Singapore NTU campus (credits: Jens Jaeger 2007).
Last year, National Geographic photographers found a human size lizard (pictured above) in the jungle of the Phillipines, named Varanus bitatawa. A vegetarian (fruitarian, actually) himself, this giant, double genitalia-d (yes, that's right), human sized beast is hunted by the Phillipino tribesmen for its meat. On Tioman Island, in Malaysia, I did see giant monitor lizards lurking in swampy ponds, minding their own business, being incredibly quiet but exerting a sense of power over their swamp. A couple other fun facts about this creature:

* He lives in the Sierra Madre mountains, and has never moved
* He is the most secretive lizard around!
* He's new to western discovery, so I can't find much more about him! 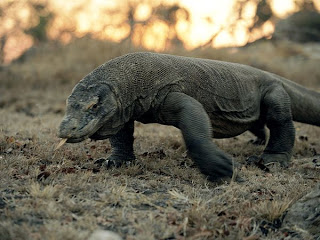 A close relative, the Komodo Dragon, inhabits the Indonesian islands of Komodo, Gila Montang, Rinca and Flores. This giant, 3 meter monster attacks its prey simply through its saliva, which holds a poison that seeps into its victim's body, while the dragon himself saunters slowly after it until it dies.
While his jaws make him seem invincible, his gait is in 18kph bursts, and he eats virtually everything, this giant creature cannot escape man's grip. Due to human encroachment, the Komodo dragon is on the endangered species list. 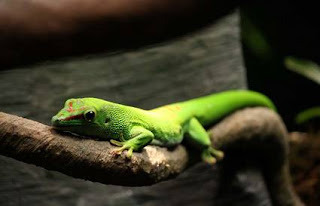 Of course, there are tons of little species of geckos running around Asia, hanging off campus dorm doors and hiding in showers (ok, they're not as bad as the cochroaches hiding the shower, I can tell you that!) In Washington D.C., there is a gecko feature at 11am every Sunday morning, dedicated to these beauties (ok, I admit, I'm not sure I'd ever want to hold one, but they LOOK beautiful!)

* Tockay geckos are the vicious kind, who make sneezing noises before they bite (35 cm long)

* Stressed out geckos shed their skin (they're scared of people)

* The teeniest gecko is 16mm long

* Geckos are the only lizards who socialize

That's my random rant on a few types of lizards in places much, much warmer than here. Keep warm, Edmontonians - and hang on Brits, cuz the Singapore Lizard is coming your way in exactly seven weeks!
Posted by Sapna at 5:23 AM
Email ThisBlogThis!Share to TwitterShare to FacebookShare to Pinterest