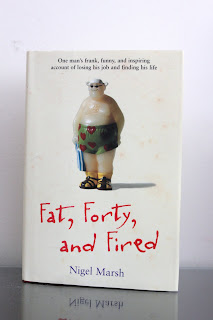 As promised, this month's book review is of a different genre; I chose a quirky look at life, from a corporate British/Australian CEO who took a year off to be with his family. Fat, Forty & Fired takes a leap into the social stigma of the stay-at-home dad, the downsizing family and those who don't put their career first. Simultaneously a recovering alcoholic and reforming workaholic, Marsh uses the opportunity he has to quit his job and mend relationships with his children and wife, rather than re-locate his family for the third time and take one of very few positions left at a merging company. He fires their nanny, uses their life savings to live and takes a giant stride into the "insecure", "unstable" and pitied state of true happiness.

His leap back into the corporate world a year later proves that it has changed very little and the top rungs of the ladder will always remain the workaholic frenzy he remembered, but he himself begins to appreciate other aspects of life. Taking care of four small children, swimming, working out, family trips and weekends at home keep him busier than his executive job; one outcome I had not expected .It's so easy to judge those who don't work as unproductive, but Nigel and Kate Marsh show us how untrue this is. Perhaps the most surprising is the extent to which others express their pity over their position, while Nigel himself was at the happiest point in his life.

Isn't it interesting how social status plays such an immense role in our lives and our perceptions of others? Don't get me wrong, money is important, work is important, but how many of us can define "success" another way?

Though his book was entertaining, his writing is a little too simple; his comical but educational speeches are must more enjoyable! It is a ten minute video, but believe me, worth the ten minute break you're about to take!


After the death of one of my best friends, Stephanie Wertz, two Fridays ago, I've come to realize that, cliche as this is, life is short and I must live the life I love. A week in London is just six weeks away, and I'll be on a mission to discover the city, not as a tourist this time, but as a potential local.

Posted by Sapna at 10:40 AM
Email ThisBlogThis!Share to TwitterShare to FacebookShare to Pinterest