Love & Hate in The Hunchback on Stage 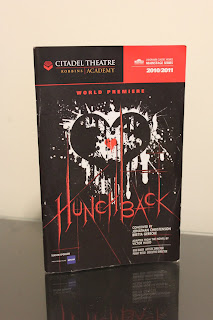 Dark and mysterious, macabre yet enlightening, Catalyst theatre brings Victor Hugo's classic to the stage. The same theatre that brought us the hilarious I love you, You're Perfect, Now Change last summer (click here) turns Hugo`s story into a Sunday night wonder. Jonathan Christenson and Bretta Gerecke, on the artistic team at the Catalyst, did a fabulous job coordinating the cast, set and music of this creative musical. The narrator, especially, was an interesting addition that set the sinister tone of the play.

Unlike Disney's upbeat version, the Citadel's production of Notre Dame de Paris, as Hugo first titled his novel, allows us to take a look inside the minds and hearts of an obsessive lover, his dangerously seductive woman, and his poor, deaf, crippled servant, who he loves to protect. Quasi-modo, who likens the church bells he rings to birds, remains the innocent picture of moral perfection, while the priest who takes him in, Claude Frollo, becomes the villain of the play, with Phoebus in tow as equally evil. 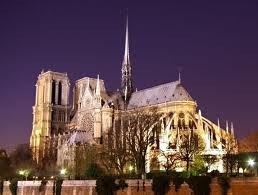 Admittedly, my experience with Hugo`s original text reaches its boundary at a few chapters of the novel (literaturepage.com), but the emotional, passionate rendition of his work which the Catalyst put on was astounding. Stephanie, it`s been just under a month since you left us, and I know you would have loved to use your tickets for this play. As Victor Hugo so eloquently tells us through Quasi-modo in Book (Chapter) 13, ``friendship is...two souls which touch without mingling, two fingers on one hand``

I will never forget you, and you will live forever in my heart.

My next play review will likely be at the Globe theatre (or another) in London, or if I am a tad more lucky, at the Royal Shakespeare Company`s theatre in Shakespeare`s home town, Stratford-upon-Avon, next month. T minus four weeks to the UK!
Posted by Sapna at 11:30 AM
Email ThisBlogThis!Share to TwitterShare to FacebookShare to Pinterest