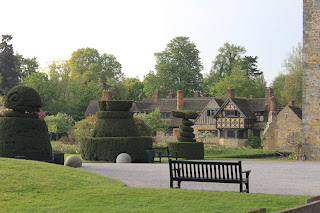 Royal families in Great Britain punctuate the country's history, with their marriages and divorces, childbirths and deaths, speeches and actions. One week before the upcoming royal marriage of William and Kate, I visited Hever Castle, near Seven Oaks in Kent, where royals and rich families spent their days.

After the Tudors bought the castle, it was home to Henry VIII and his first wife, Catherine of Aragon. As Catherine could not bear

Outside the castle gates, by the moat and drawbridge.

him a male heir, Henry's interest soon strayed and he fell in love with one of Catherine's ladies-in-waiting, Anne Boleyn. Catherine was, of course, the mother of a female heir, Mary, Queen of Scots. Secretive and frowned upon, Henry and Anne continued their affair until Henry convinced the Pope to give him an annulment of his marriage to Catherine, based on the grounds that England needed a male heir.

Henry quickly married Jane Seymour, who gave birth to a male heir, Edward, and the couple divorced 6 months later. Later, Henry fell in love with Anne of Cleves, and therefore charged Anne Boleyn with treason and had her executed; she was sentenced to the "kinder" beheading by sword, not axe, as a beheading by axe could be drawn out (torture instruments are showcased in the castle as well). After Anne of Cleaves death, Henry married Catherine Howard, and then Catherine Parr, who ran the castle as a household. Hever castle passed hands a few times, finally falling into the richer families in London, John Jacob Astor, an American businessman who fell in love with England. He soon teamed up with the well-known Waldorf family (yes, the owners of the famous Waldorf-Astoria hotel chain). One of Astor's property companies now owns the castle.

To update those of you who marvel at the complexity of the royal houses, there are many: the Houses of Wessex, Normandy, Blois, Plantagenet, Lancaster, York, Tudor and Stuart. The Windsors are the current English Royal Family, and some of the House of Wessex is married in.
Check out the family tree below, and go to http://www.britroyals.com/tudor.htm , where you can click on the House you want to learn about, then click the royal figure, and learn all about them! 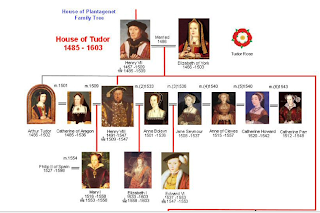 Apparently The Tudors (about the personalities in the House of Tudor beginning in the 16th century) is a great rendition of British history in action - I've yet to rent and watch the four seasons in this series!


Above: Anne Boleyn in The Tudors
Below: A beautiful swan on the Hever castle grounds - thanks, 300mm lens for my Canon T1i! 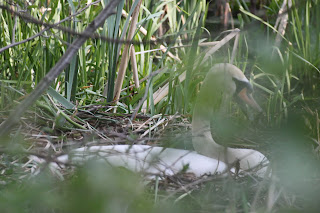 Check out the slideshow below. Pictures of the inside of the castle were prohibited(see hevercastle.co.uk for their own copyrighted photos). I did get a beautiful view of the outside, though!

It's really fascinating to be in a country where history goes farther beyond the 19th century.

Posted by Sapna at 1:09 AM
Email ThisBlogThis!Share to TwitterShare to FacebookShare to Pinterest

I'd love to see this castle! Also, Henry got the annulment from Catherine of Aragon based on the fact that she was his brother's widow. Anne came directly after. Jane died in childbirth - she was his favourite wife and they're buried next to each other in a church in the Windsor Castle grounds. :)

Check out Hampton Court if you're a Henry lover - it was his favourite home!