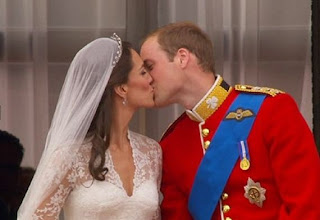 All of England watched today as William and Kate tied the knot - in the most regal, celebratory way possible. Even the locals, who will have to see BBC replay (and replay, and replay) the event all week, admit that England does regal events...well, royally. Although I originally intended to make the trip down to London to join the 250 000 fans in wishing the couple the best - but really, I'm glad I didn't. Times Square at New Years in 2007 (see blog entry here) was crowded enough, and at least there, you could get a spot to see the ball drop. Here, thousands and thousands crowded Hyde Park, Trafalgar Square, Buckingham Palace and The Mall (pronounced maowl), trying to catch a glimpse.

Kate's dress was gorgeous though! I'm sure copycats will pop-up in shops everywhere, dresses that mimic her lacy, ivory dress with a modest train (well, modest for royals, anyway). Aunty Viniti, Uncle Steve, Jhaiji, Sunny, Nia, Tina and I watched the royals at Jhaiji's house. I've learned so much from Nia on the history of this beautiful country. Compared to the most 200 year history Canada has, England has a wealth of stories; you could spend weeks in museums and castles! Although we did dabble in European history in high school, none of it was as fascinating to me then, as it is now, nor was it as detailed. My next trip here will be a quest to understand them better!

As a Marketing person, one comment I do have to make is that their "adverts" here are much more entertaining and creative! Check out the T-Mobile add below - it's hilarious!


Posted by Sapna at 5:40 PM
Email ThisBlogThis!Share to TwitterShare to FacebookShare to Pinterest