The Mother Tongue: Bill Bryson on the (Not so) Random Ways of the English Language 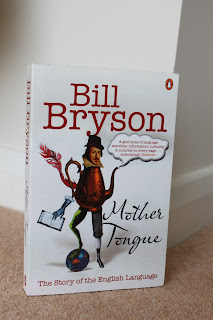 Bill Bryson's Mother Tongue was my choice for a book review this month, after April's trip to the United Kingdom. Bryson, a renowned Australian travel writer, deviates from his Aussie adventures towards British vs. American comparisons, to bring us an eclectic, literary, look at English as it progressed from Old English, and as it compares in the UK, North America and Australia.
Four and a half thousands differences exist, he tells us, between "British" and "American" English.  Spelling, the grammar aspect that drives my students crazy, differs so greatly since regions of England had different dialects and accents (and to some extent, still do today). Writers struggled and argued on how to best write the words they knew; later they argued how to simplify them. Even Shakespeare spelled his name multiple ways! 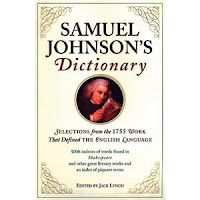 The first English dictionary was apparently written in 1721, by Nathaniel Bailey, but was largely incomprehensible to most. Samuel Johnson wrote the first dictionary for the common man, but thought his role to record the language, not correct it (hence spelling irregularities, like "fancy" and "phantom" for the "f" sound, "hark" but "hearken").

Noah Webster came along next, a lonely, boastful, religious, patriotic, unsuccessful American lawyer American from Hartford (Bryson 149) and changed the English spellings. At times, he simplified (colour to color) and at other times, he deviated from the pattern (radium and potassium are ok, but the British aluminium was changed to "aluminum". Some phrases such as "different than" instead of "different from" are classified as American in the modern world, but were decidedly British at the time of Dickens and Coleridge!
It's like language is an ever-changing trend, and different structures come "in and out" of style. While I thoroughly enjoyed this literary journey, I'd say this book is only for those who love literature and history and/or love random facts. They may be historical and "useless" now, but wow are they a conversation starter (okay, for some people...) If you're going to read one page in this book, read the Brit. vs. American chart on page 171 - and learn why a "boot" doesn't always go on your foot and an "estate car" isn't likely to take you anywhere fancy...
For those of you who want to check out Bill Bryson's more "travel" like books, read In Notes from A Small Island; a great adventure. His audio books are popular in the UK (due to the ridiculous amounts of time people spend in traffic). Notes on a Big Country, for example, compares life in America to life in the UK, through hilarious anecdotes.
Thanks, Uncle Steve, for this great book review recommendation!
Stay tuned for June's book review, coming soon!
Posted by Sapna at 8:45 PM
Email ThisBlogThis!Share to TwitterShare to FacebookShare to Pinterest