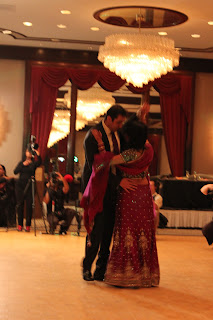 Sneha and Kashan’s wedding was a fantastic celebration that combined culture and class. With a short, one hour wedding ceremony (that’s super short for Indian weddings), a jovial priest, and great food, it was a celebration that was an eventful success. In fact, the priest jokingly referred to the religious part as a "drive-thru" version of the ceremony. Events were on time and flawlessly executed, unlike the wedding I attended two years ago in India (see February 2009 entries).
The Muslim ceremony was performed two days before, and the priest explained the significance of the Nikah ceremony (acceptance into Kashan’s family), before turning to an explanation of the Hindu ceremony. I absolutely loved her outfit – not overdone and definitely beautiful.
Slightly different than a Northern Indian wedding, this South Indian wedding had a custom of Sambanda Male (Garland Exchange)   between the couple. The person who tosses the garland around their spouses’ neck first has the upper hand in their relationship – Sneha won, of course!
·         Steps in the Marriage
· 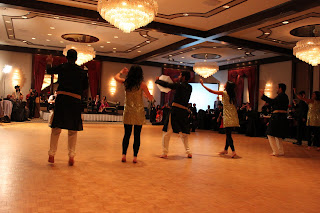 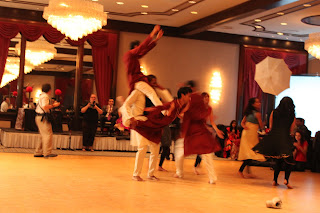 It is said that“Many people will walk in and out of your life – but true friends will leave footprints in your heart” - Anonymous'
The evening ceremony at the Crowne Plaza hotel made me remember the fun times Sneha and I had as kids – hanging out all the way through junior high. It’s interesting, so many years later, how childhood friendships may appear to fade but are still strong at heart.  Here’s to keeping in touch with those important in your life! 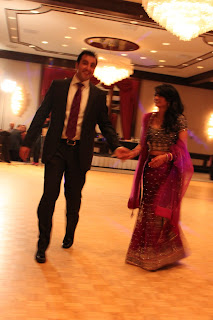 The dances were really spectacular – so much coordination and based on a skit that combined traditional dancing with personal anecdotes. With an open bar, and tons of people on the dance floor, I had a chance to test my photography skills…
As da Vinci elegantly put it, “Simplicity is the ultimate sophistication”  - and this wedding was an illustration of sophistication.
Congratulations Sneha and Kashan!

Posted by Sapna at 8:58 PM
Email ThisBlogThis!Share to TwitterShare to FacebookShare to Pinterest