The Cellist of Sarajevo: A Postmodernist Perspective on War 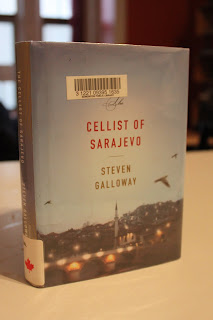 A three hour read perfect for the plane, Steven Galloway's The Cellist of Sarajevo is a beautiful novel with a simple message - in times of adversity, or times of joy - love life and live life in the present. Simple as that seems, it's so easy to dream of the future or dwell on the past.

A three week story, set in the front lines of conflict in the Sarajevo siege of 5 April 1992 – 29 February 1996, this novel brings to light human nature, compassion, and the dark depths of identity and psychological trauma in times of war. Based loosely on the story of Vedran Smailovic, a musician who watches his best friend die in a massacre of 22 civilians lining up to buy bread, the novel uses artistic license to tell a compassionate story. The musician, the cellist, vows to play his music at 4pm in the centre of the conflict, for 22 days, to honour his friends.

The story centers on three characters  - Arrow, an expert sniper hired to protect the cellist from being shot, Kenan, a pessimistic man who wants only to live in the past and protect his family, and Dragan, a 65 year old man who refuses to leave Sarajevo with his wife and son when he can, because he feels Sarajevo is his only home. While the hills and valleys are filled with Serbs fighting the ill-equipped Bosnian military, and civilians, Kenan, Dragan and Arrow share their personal perspectives. Kenan finds compassion in times of adversity as he helps an old neighbour he despises, Dragan finds life again as he finally allows himself to let his old friends into his life, remembering the past as a pleasant memory and not a place to live in the future. Arrow, a university student turned sniper, lives by her code name only, in an attempt to shield herself from who she has been forced to become in the war.

In this must-read novel, Steven Galloway, a creative writing professor at the University of British Columbia, presents a beautiful perspective on life. In just a few hours on the plane to Montreal, I decided that this is what July 2011 holds for me - living in the present.
Posted by Sapna at 3:55 PM No comments:
Email ThisBlogThis!Share to TwitterShare to FacebookShare to Pinterest

With the tutoring term dying down, Thursday night was the perfect opportunity to take in a little rooftop patio sunshine at Latitude 53. Hosted by Team Edmonton, a volunteer-operated, non-profit society serving primarily members of the Gay, Lesbian, Bisexual & Transgendered communities, but open to everyone, this event was an interesting mix of conversation and music that was...well, different. Great and artsy for half an hour, but after that, a little too much like an overly loud buzzing bee...the company was great though!

Sean and I spent the evening meeting new people and discussing random topics from work to stress to art to culture to music. Although I had never been to this non-profit artist-run center art centre, I have to say the rooftop wine, conversation and patio were the best part; the art was on the eclectic side. The clusters of books, paper mache and painted objects were an interesting piece, though. I think August will call for a trip to the Alberta Art Gallery, for the new Andy Warhol exhibit (showing May 28th, 2011 to August 21, 2011).

Just under a week until I'll be blogging about the artsy, educational, and entertaining parts of Montreal. Kiara and her kennel are ready for departure - one more exam to hand in, and so will I be.  While this event was a simple summer evening out, it made me realize that I don't have enough of those simple evenings in my life. Perhaps my Chinese horoscope was right; September may bring a tweak to my lifestyle.
Posted by Sapna at 3:57 PM No comments:
Email ThisBlogThis!Share to TwitterShare to FacebookShare to Pinterest

My First Diamond - A Locket Full of Memory

To commemorate Stephanie Wertz, Meghan and I decided to get matching lockets, with Steph’s picture on one side, and her funeral flowers on the other. After a decidedly difficult search (apparently silver lockets under the hundreds of dollars price range are a rare find), Meghan found the perfect one at an unexpected mass retailer. 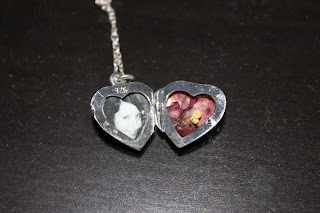 Thank you, Meghan, for treating me to this wonderful gift. I know our friendship has become stronger since Stephanie left us. Trying to believe that someday I will see her again, in some form, I wear it every day (except while in hot yoga or MMA class, of course); I know Meghan does too. Meghan’s yoga blog details her journey up to her competition last Saturday (visit 30daysmeghan.blogspot.com) for a journey into a Bikram yogi’s life.


This is perfect timing to have this locket, as we are two weeks to the day away from Montreal and the start of something new. Over the last few months, I have realized how important it is to rid our lives of the unnecessary stress and live the life we want. For me, I know 2011 is a learning experience, and 2012 is my year. Chinese Horoscopes seem to agree with my thought here; the Ox (me, 1985) should be careful: 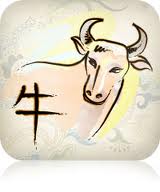 So, with a beautiful silver & diamond locket, Steph is forever in my heart, and forever with me on my journey towards happiness. I miss you!
Posted by Sapna at 12:00 PM No comments:
Email ThisBlogThis!Share to TwitterShare to FacebookShare to Pinterest

Two years after my Martial Arts training began, I have finally engrossed myself into the world of UFC (Ultimate Fighting Championships), thanks to my friends Cynthia and Simon, who take  classes with me at Edmonton Mixed Martial Arts every Monday, Wednesday and Friday.

Originally from a small town in Quebec, they are both helping me practice my French, for my month in Montreal (just two weeks away!) We have started watching the fights together at Boston Pizza, too  (horrible food, as usual, but the Northend one has a giant TV screen). It seems so inconsequential when you do not train yourself, but after martial arts training, every move they make is significant.

Saturday's fight was Brazilian Junior Dos Santos' shot at winning a place in the title fights, in September, vs. the current champion, Cain Velasqueza, a  Mexican-American. I still find irony in his name - "Junior" is HUGE, with giant reach (77 inches I believe) and a belt in Brazilian Jujitsu; Junior fights in the heavyweight category. I'm slowly starting to remember names of the fighters; it's amazing to think that some of the people on the Fight Card Saturday night won, their first time in the MMA ring. What a great way to spend a Saturday night. Hey, who wouldn't like watching completely ripped, sculpted men fight in shorts? 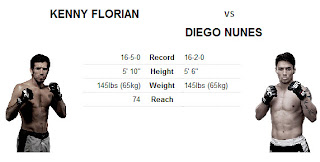 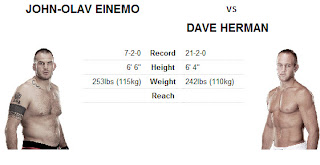 Notable fights of the night were:

I will say, though, that, in light of the last fight I watched, dos Santos vs. Carwin was bloodier than I ever expected. Although it was an amazing win, from the look on his face, even dos Santos was surprised at the damage his strong, buff arms had done. While we (especially Cynthia, who had been awaiting this fight for months) wanted dos Santos to win, it was still a bit gruesome...
(pics above and below taken from the Fight Card at www.ufc.com and mma-core.com) 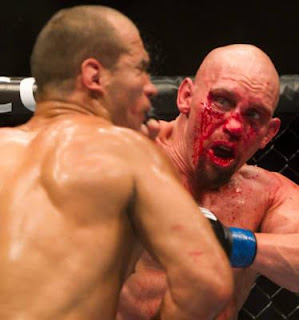 ﻿﻿﻿ You know, one of the things I will miss most about Edmonton is Mixed Martial Arts class - but here's the good news - the UK has MMA champions, too! Kiara is passport- ready as of November 13th, so mid 2012 looks like a good bet. Somehow, this dream will come true. 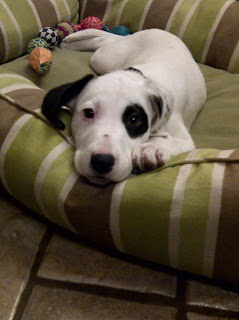 ﻿﻿﻿
After the fight, I drove a few blocks to Steph T's beautiful new home, and met Luna, her gorgeous puppy. (Kiara and Luna will have to hang out when we're back from McGill). Blue heeler, collie and mixed with two other breeds, this 7 week old pup was really a beautiful end to an awesome night.
Posted by Sapna at 12:34 PM No comments:
Email ThisBlogThis!Share to TwitterShare to FacebookShare to Pinterest
Newer Posts Older Posts Home
Subscribe to: Posts (Atom)