A week after our official matriculation induction as Oxford students, this is literally the first hour I've had free to describe this historically significant, unique event. According to Professor Gillian Evans, author of Oxford: A New History, the tradition goes back to the "medieval requirement that every Master should keep a Register" (Evans, 2009, Cherwell.org). Up until the 1920s, there was even an exam that all masters' students had to pass in order to be let in to matriculation. The Masters of Arts in Shakespeare's day were incredibly important and taught undergraduates, as well as ran the university administration. Apparently there were "town vs. gown" fights, and the university protected those on the Register on the "gown" side of things.

Interestingly, despite having attended classes for a week already (last Saturday; two weeks now), we were not "officially" Oxford students until matriculation was complete. This began with a roll call, in which every new student at Lady Margaret Hall college waited to hear their name called. In fact, if you're not on the list (they email you many times in advance to ensure that you are)...you can't attend classes at Oxford or graduate. I wonder if they've ever had anyone fail to show up?? I must add, the commentator/speaker was quite amusing, almost comical, trying to make a pun out of any last name he could, while we waited in the (luckily sunshine, not rain) for our name to be called.

As you can see to the left, this is basically where J.K Rowling must have had her idea for the structure of Hogwartz. It was very amusing to walk across the park in unison, in uniform, and to the Sheldonian Theatre ---only to have tourists lined up, snapping photos of us! I guess we were part of quite the event for tourists to gaze at; definitely can't say I've ever done that before! The ceremony inside the Sheldonian was quite short --20 minutes, with a few phrases in Latin, and a warm and also interesting speech in English by the Vice Chancellor.  Apparently (according to Cherwell.org), the Latin speech is as follows:


Scitote vos in Matriculam Universitatis hodie relatos esse, et ad observandum omnia Statuta istius Universitatis, quantum ad vos spectent, teneri.'
‘Know that you are today added to the Roll of the University and bound to obey all the statutes of this University so far as they apply to you.'

At the risk of looking pretentious, Juliet, Sultana, Hannah, Dima and I took some photos in the autumn parks of LMH, while waiting for our mandatory appearance (hours later) at the MCR (graduate) and JCR & MCR combined (with undergraduates) group photo. Many thanks to Dima, for instructing us on how to stand and pose for the camera, and to Tim, for being the one to snap photos of us ladies (countless times, until we got the "perfect" shot).

Check out the Glog below for a fun snapshot!  To view the pictures and poster more clearly, click on it or take a look at this link on glogster.com:
http://expressionstutor.edu.glogster.com/matriculation-ceremony-oxford-2012/

Another perk of Oxford life is formal hall, a dinner that occurs every Friday, but must be booked in advance. This particular hall about a week and a half ago, was the first formal hall, where we were all greeted by the Principal of the college, and had a wonderful meal in our formal dresses or sub-fusc- and gowns. It felt like being in a moment of history - like a flashback to a previous era -- as the Principal rose to leave first at the end of the meal, followed by the head table, and then, us "regular" college members. 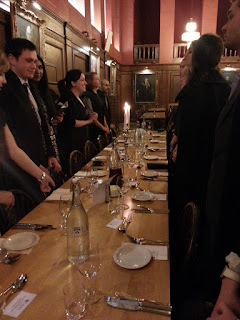 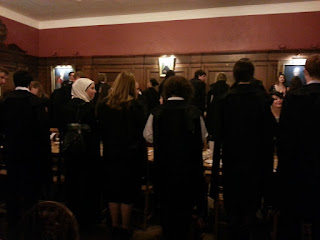 As you can imagine, as traditional and wonderful as these ceremonies are, they do cut into our significantly short reading time (ie: with my optional-but-strongly recommended sessions, and French class, that's 17 hours of class time per week!). Last Saturday was a write-off study-wise, as was today (thanks to a very interesting, albeit all day seminar on Research Methods)....so I'm off to hit the books. I've had a request for a blog on English tea...and Juliet and Sultana have said that, when we have the time, we should go out for "English high tea", so that post is hopefully coming sometime soon!
Posted by Sapna at 8:18 PM
Email ThisBlogThis!Share to TwitterShare to FacebookShare to Pinterest
Location: Oxford, UK