Kananaskis, Alberta - A Beautiful Escape in the Canadian Rockies Amidst my Whirlwind Student Visa for Spain Trip

Once again, I am well behind on my blog - this should have been posted nearly two weeks ago! The last three weeks have been a whirlwind trip to Canada, in which I was in six cities in three weeks (and three of them twice!) on a quest to get my student visa for Barcelona. Thank you, Aeroplan, for funding the majority of my airfare.

Now, I'll skip the drama that dominated my trip (I definitely won't be planning to travel home or stay with family for the next three years), and focus on the incredible time I had visiting friends on this whirlwind holiday. 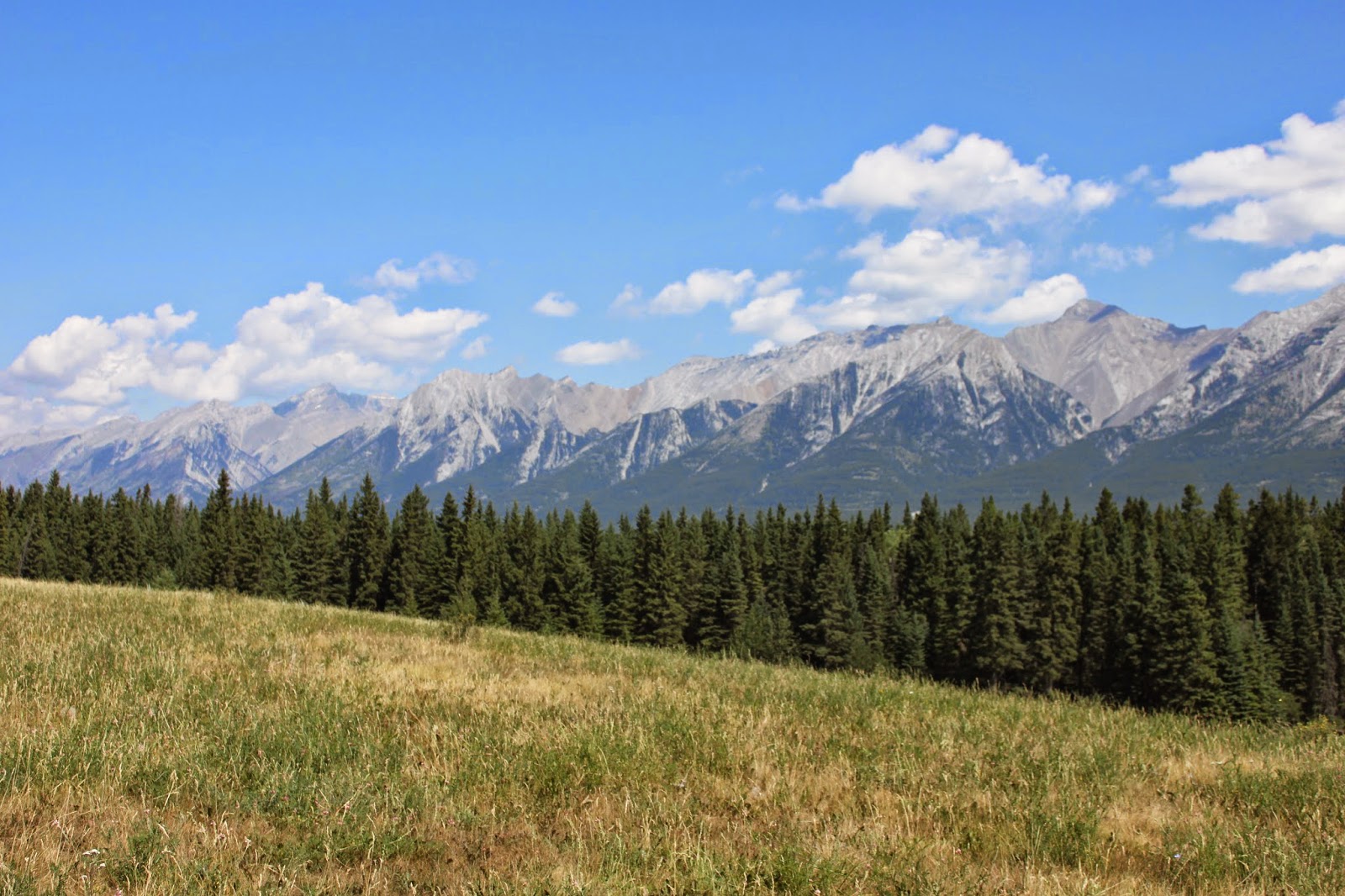 In Toronto, I stayed with Steph B. and her fiance, who hosted me in their lovely home in Whitby, Ontario. I also discovered their Bengal cat, who was sneaky, but shy and so, so, beautiful. Fifth generation from a tiger, apparently!

Getting the Spanish student visa was a stressful hassle, as the embassy refused to accept my offer letter (the most simple document in my giant stack!) due to a lack of specific start and end dates for the first year of my PhD. Now, this particular requirement is:


One thing I've learned about embassies is that they can invent their own rules and everyone has to follow them. They are in charge of who enters their country, after all.

After a few hours of struggling with them and showing them emails,  late night e-mails to the department head at the University of Barcelona linguistics department, and thankfully, a revised offer letter at 3 am, I decided to re-try the process the next day.

Then, I breathed a sigh of relief and walked through downtown Toronto for a few hours. What a beautiful afternoon by the boardwalk and lake! 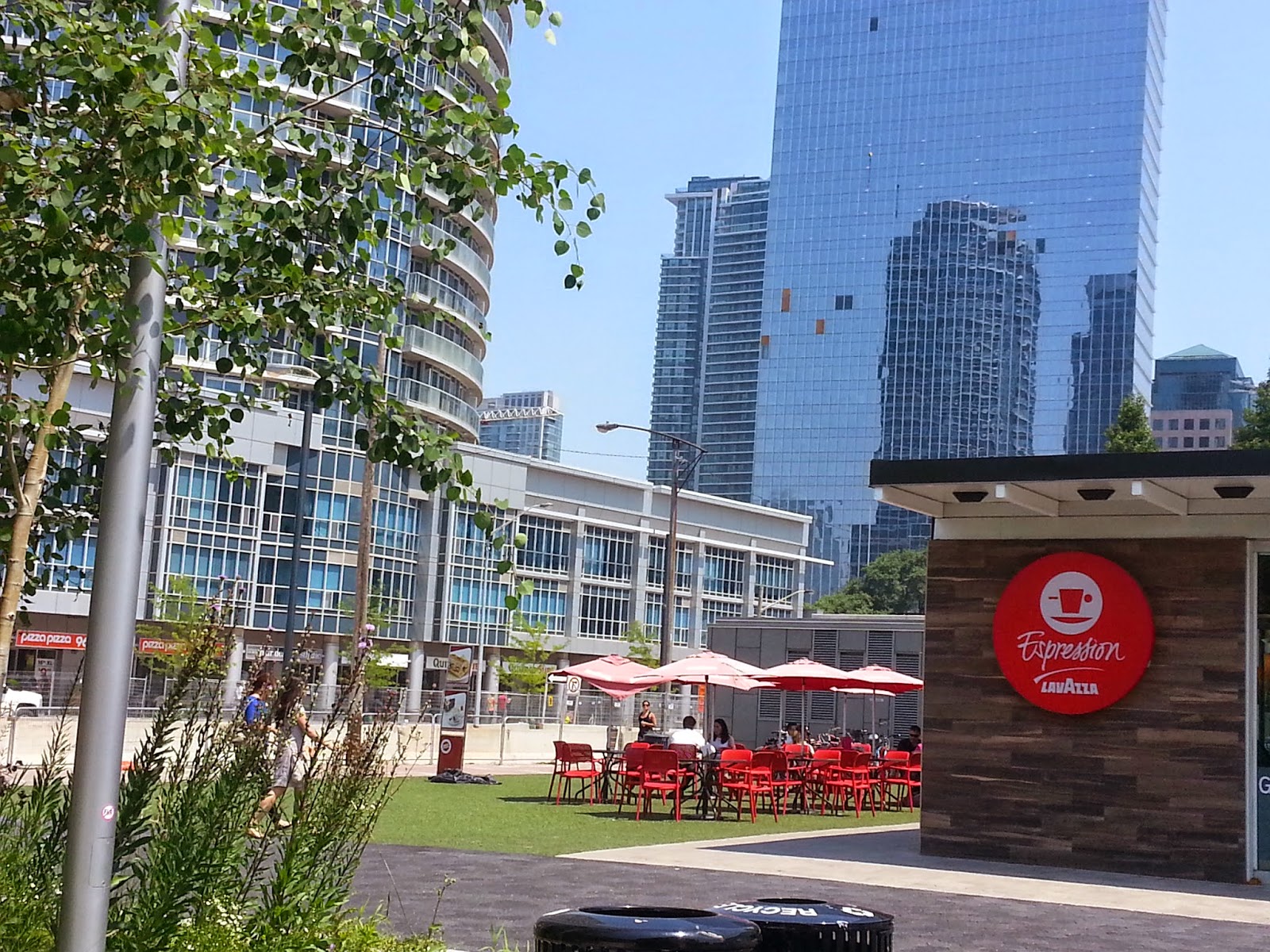 Catching up in Edmonton

Arriving in Edmonton on the night of Wednesday, July 23rd, I had pleasure of meeting Pam and Janice for coffee a few nights later and catching up with Sheena and Sneha over dinner Tuesday night. The best part was that I even got to see Camille for an evening and had dinner at her house!  I miss you, bestie! Camille just happened to be in town for a few hours between her wedding in Cape Breton  and her flight back to her teaching job in Cambodia. It is so much fun to catch up with friends after so long!

In a rush to escape and breathe some fresh air, I was thankful when Dayna picked me up Thursday morning for a beautiful road trip to her friend's mountain timeshare at Kananaskis Lodge, Alberta.  There, I got to snuggle with Roger and Wyatt, Dayna's two beagles, hang out with a few friends, enjoy a few hikes, eat delectable vegan cuisine and chill in the hot tub. 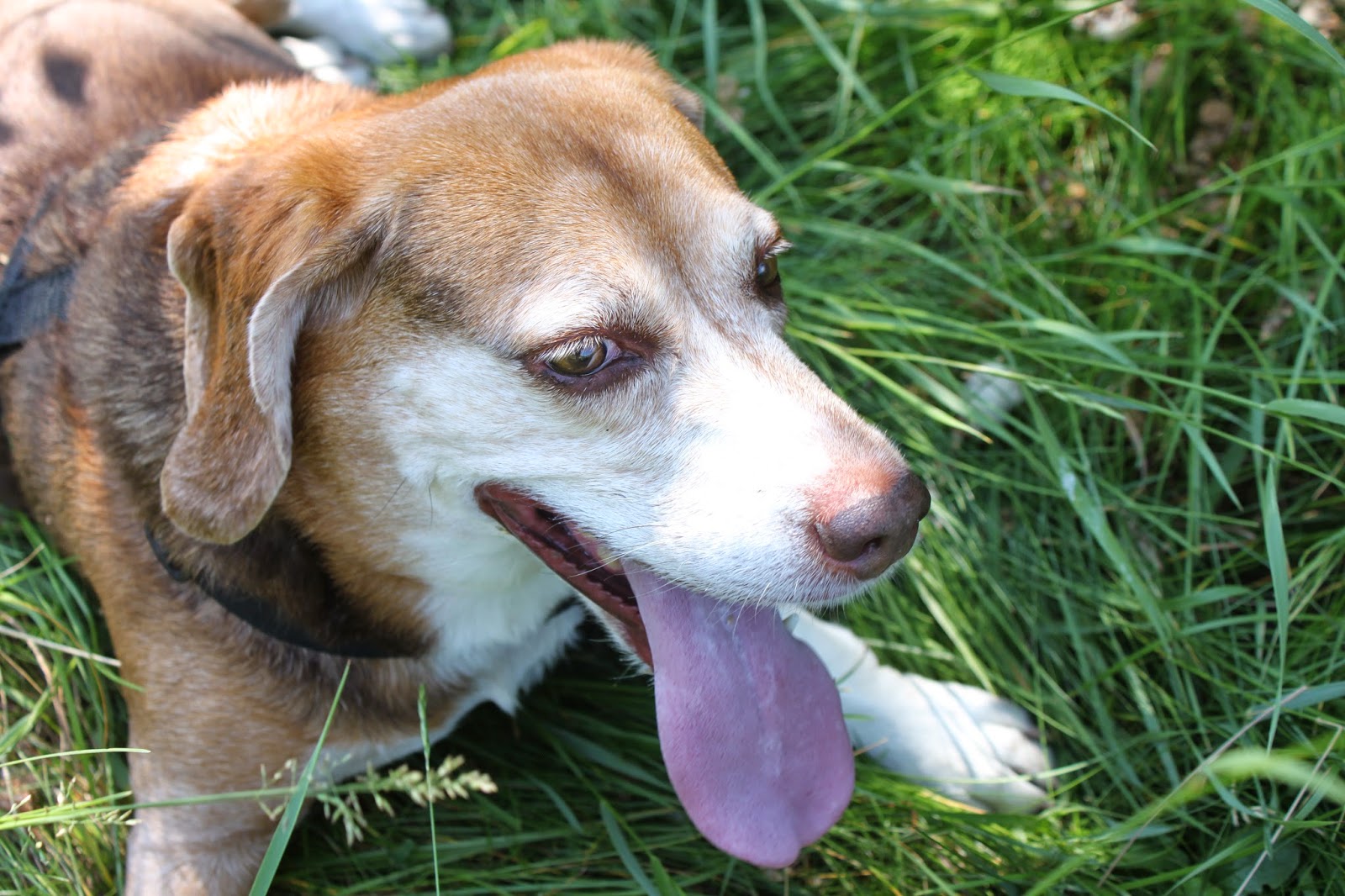 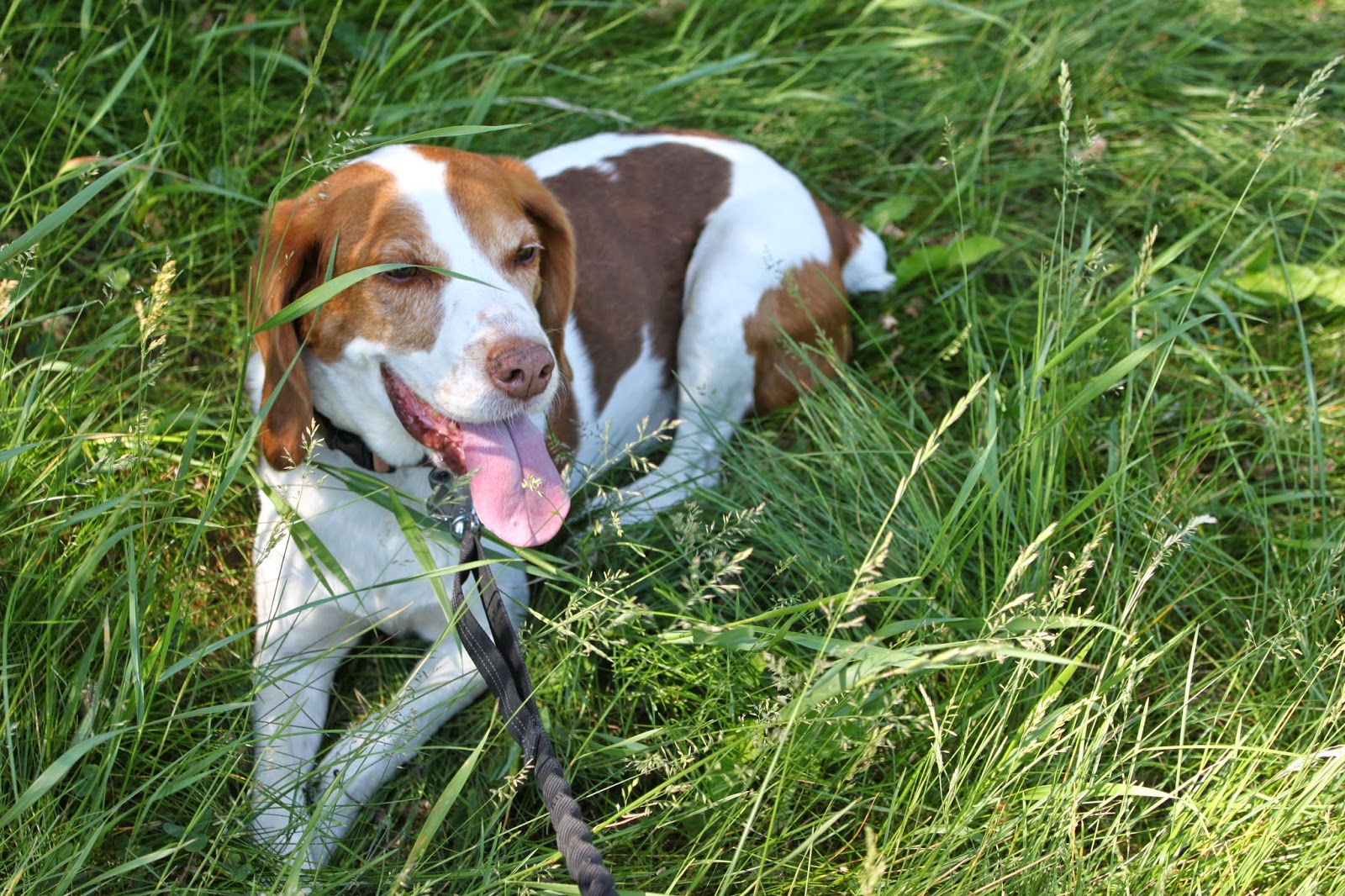 On our short hike the first day though, we accidentally walked a (crowded, usually safe) path near Quarry Lake that had had an unprovoked bear attack a few days before. Yikes! Remember the bear spray!

So, the Saturday morning hike was definitely the highlight of the mountain trip. We had planned to hike a medium level trail (as my official hiking boots, that I used in my trip to Peru in 2010, were in England).  It turns out that trail was closed for maintenance, and so Dayna, her husband Arlan and I decided to hike the adjacent trail. He did say, "it's pretty steep", but I thought, no problem, I've hiked mountains before.

It was SWELTERING hot and an 8 km hike UP. Straight UP. With Wyatt (the dog) attached to my waist.  You know how trails normally have switchbacks which make the steepness seem less daunting? Not many of those on this Centennial Ridge trail! My 2.5 litres of water were nearly finished by kilometer 7. THEN... 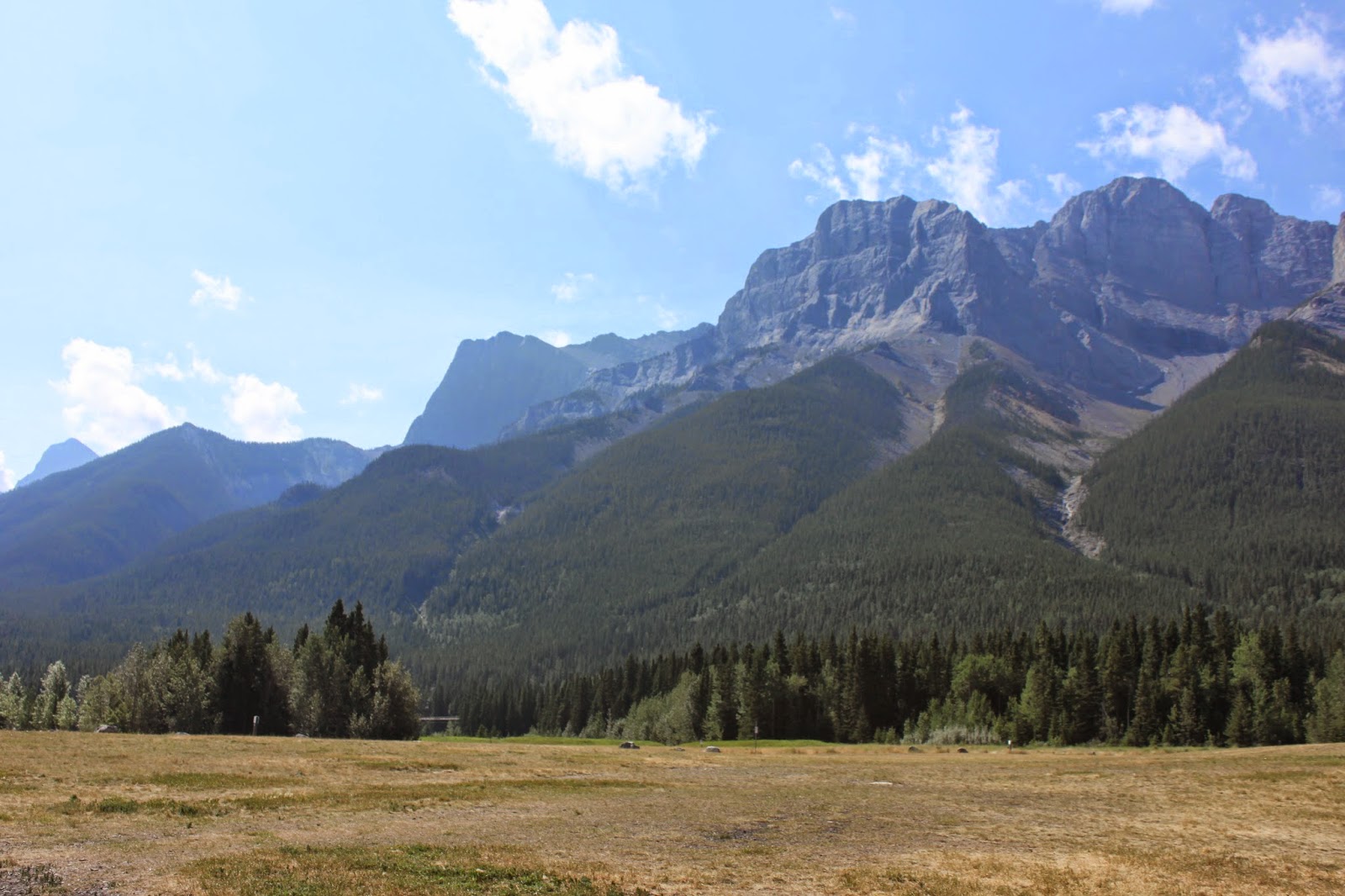 ....IT STARTED TO THUNDER. HARD.  We felt droplets of water, indicating the ferocious storm to come. 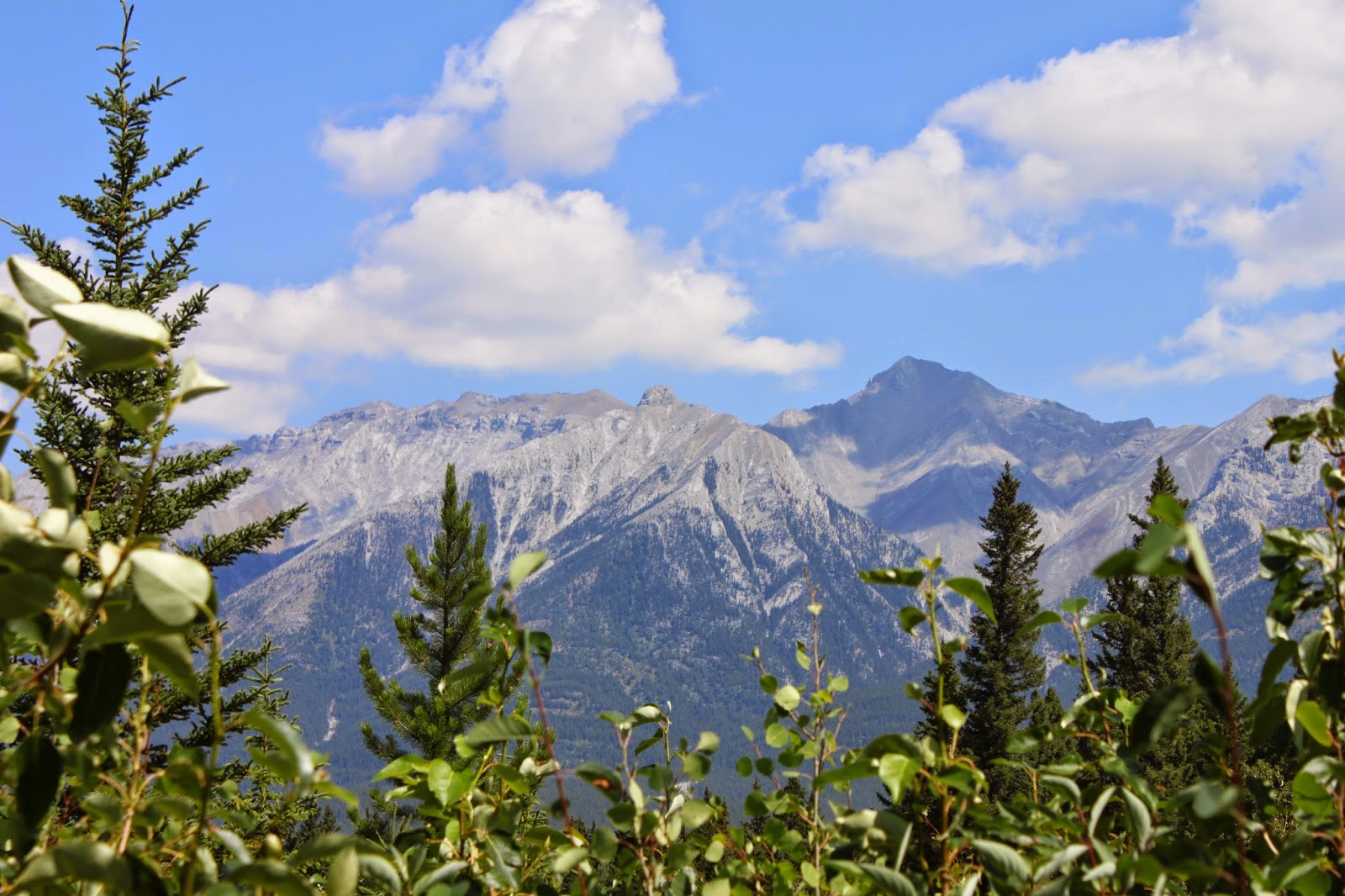 We decided it was safest to skip the last kilometer (although there were a few people still headed that way). One km down it started to POUR. We rushed for the tree line, stepping as carefully as possible on slippery rocks. We were drenched, exhausted and shivering, but we made it down to the bottom of the mountain and into Arlan's truck. 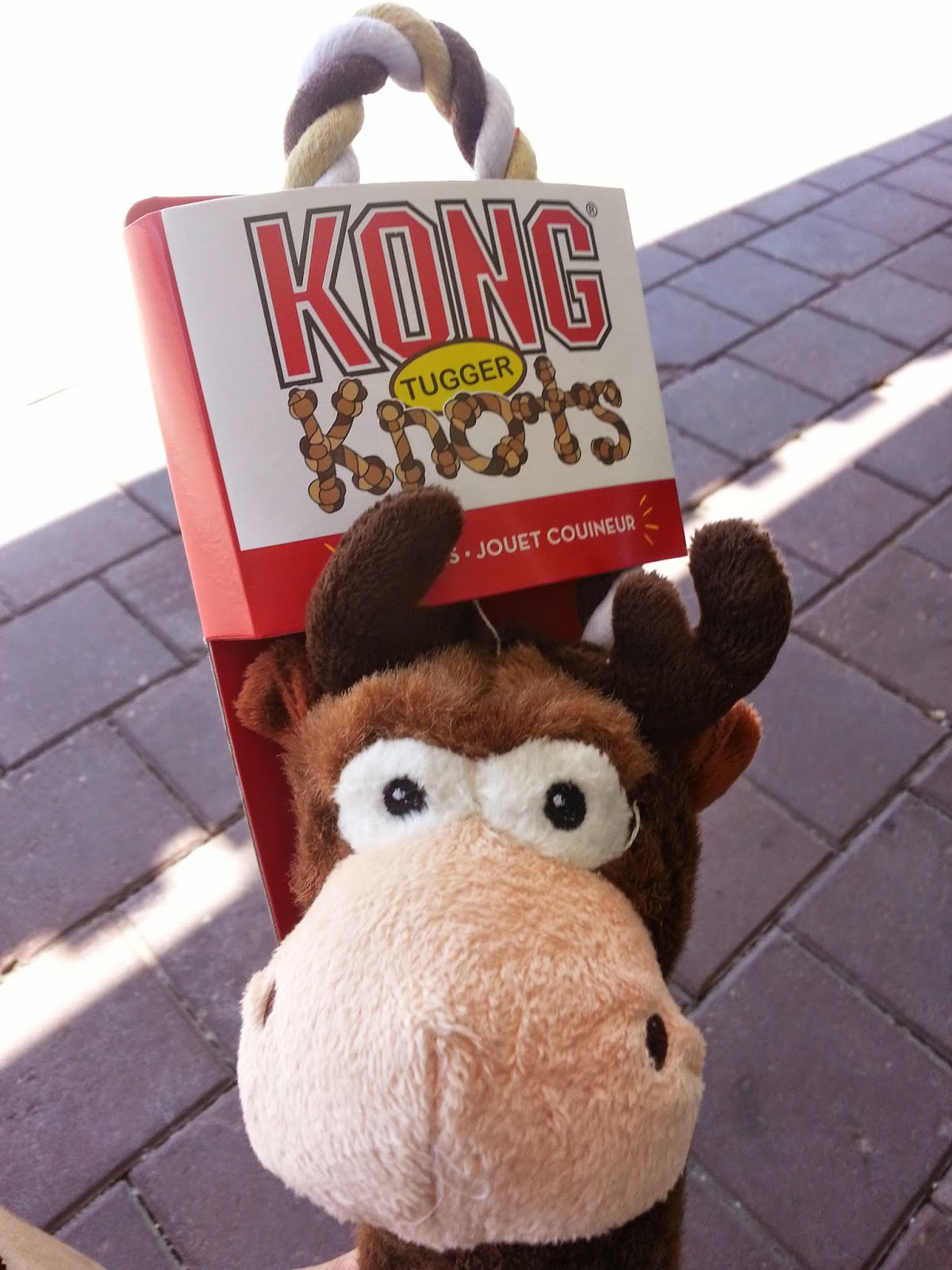 The next day we made a pit-stop in Canmore, AB, a beautiful little town that I've visited several times before (with Julie, here  and Sean, Janice and Bonnie, here). I found a cool moose Kong toy for Kiara, a sturdy backpack and a belt/waist leash (all three of which are extremely difficult to find in the UK!)

What an adventure in the mountains! Thanks to my amazing fellow Canadians!