My life in Barcelona seems like a whirlwind lately - it feels like an eternity since I've written a post (over a month!). Between intensive Spanish classes, a bunch of hours of teaching, interviews to find more work, arduous scholarship applications, taking care of Kiara and - (oh, yeah), that thesis I'm supposed to be planning, I am swamped!

This post is actually an incredibly late post that I have been meaning to write since autumn! I managed to read six books that were not academic in 2014. This sounds like a very small number, but I met my goal! 2015's goal is 9 novels.  Three of the books I read are simply written, but fabulous.  I would recommend them to anyone  (Since I read on my Kindle now, all the photos below are borrowed from Amazon)


The Fault in Our Stars

John Green is an incredible writer - such a simple style with a profound message. For me, Hazel Grace, the protagonist, is the highlight of this piece of literature - she is a 17 year old girl with a terminal illness who has an attitude that is not pessimistic, but simple realistic. She knows she will die soon and lives with that reality. Actually, she lives for her parents - and with a guilty feeling that they have given up their dreams because of her illness. At her mother's request, she attends a weekly church group meeting for sick kids. At first it is boring, but she finds herself drawn to a boy there. He falls in love her with - and she tries her best to keep him away, wanting to minimize the emotional connections she makes before her departure.

In July, when I was in Toronto sorting out Spanish student visa hell, I took a break and went to the movie theater in the mall to check out the film. I have never seen a film that I actually liked almost as much as the novel. The director (Josh Boone), with actors that are unknown to most (Shaileen Woodley & Ansel Elgort), managed to almost perfectly portray Hazel's sense of humour and zest for living her life without hurting more people.

What annoys me is how they translated the title into Spanish (Baja las mismas estrellas). "Under the same stars" --- they completely lost the beauty in the title! Argh!

Gayle Forman's If I Stay is a beautiful story about a teenage girl who is very close to her family. On a family trip, her parents die in a horrific car crash. She is left in a coma, narrating her story as she sees it - watching her visitors. She realises, somehow, that she has a choice to make -- to live, or to die. Although quite depressing, the theme touches on an incredible idea --- do we have a choice? I can't help but wonder...Stephanie, when you left us 4 years ago, when you saw the proverbial "light" into the other side, did you make a decision to follow?

I could not put this book down! (I still need to find and watch the film to see if it represents the book well --- I highly doubt it) 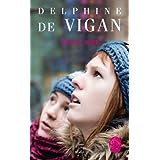 No et Moi  (No and me) by Delphine de Vigan is an incredible story of two girls from different social classes in France. "No" (Noelle) is a homeless seventeen year old, living on the street.  Lou is an incredibly smart, shy, 13 year old girl from a normal, middle class family. She enjoys people watching and always goes to the train station. One day, she meets No and is compelled to invite her for a hot chocolate at a local cafe. What follows is an incredible story of a secret friendship.  It is written in French (an easy read), but if you don't read French, try to find an English translation. It's that good!  Apparently this has also been made into a film --- I'll have to find it, too!


I did manage to take a small break from the whirlwind that is my life and have a wine and pizza night with Anna G, from my Spanish class.  My favourite pizzeria (a 5 minute walk from my place!), called Eccola! has the most AMAZING pizzas ever. Thin, dough imported from Italy, tomato sauce, a TON of vegetables and huge portions. I love it --Anna loved it, too!   (Apologies for the horrible photo quality -- that's what happens when you have to buy a cheap phone when the Barcelona pickpockets steal yours three weeks after you move here...)


Don't worry, loyal readers, I have upcoming posts on some very exciting places (not just book reviews)! Of course, I am working on my annual memory post for Stephanie W - I miss you so much Steph - you have no idea how much I wish I could have one last conversation with you, especially this week. I'm going to imagine that you are in another world or another life and are still reading my blog.

I'm hoping to head to Girona (again!) & Figueres with my Spanish language school (Speakeasy) next Saturday. They have a specially priced tour in Spanish for students - and for 15 euros, I think it'll be worth checking out!