St. Jordi's day is a perfect celebration of literature and love and already my favourite holiday in Barcelona. Every April 23rd, people celebrate Dia de St. Jordi, the day on which both Shakespeare and Cervantes died. Here, Valentine's Day is seen as a foolish, "American" commercialized holiday - but everyone loves St. Jordi's. It's the day on which men give the women in their lives they care about a rose --- and women give them books. 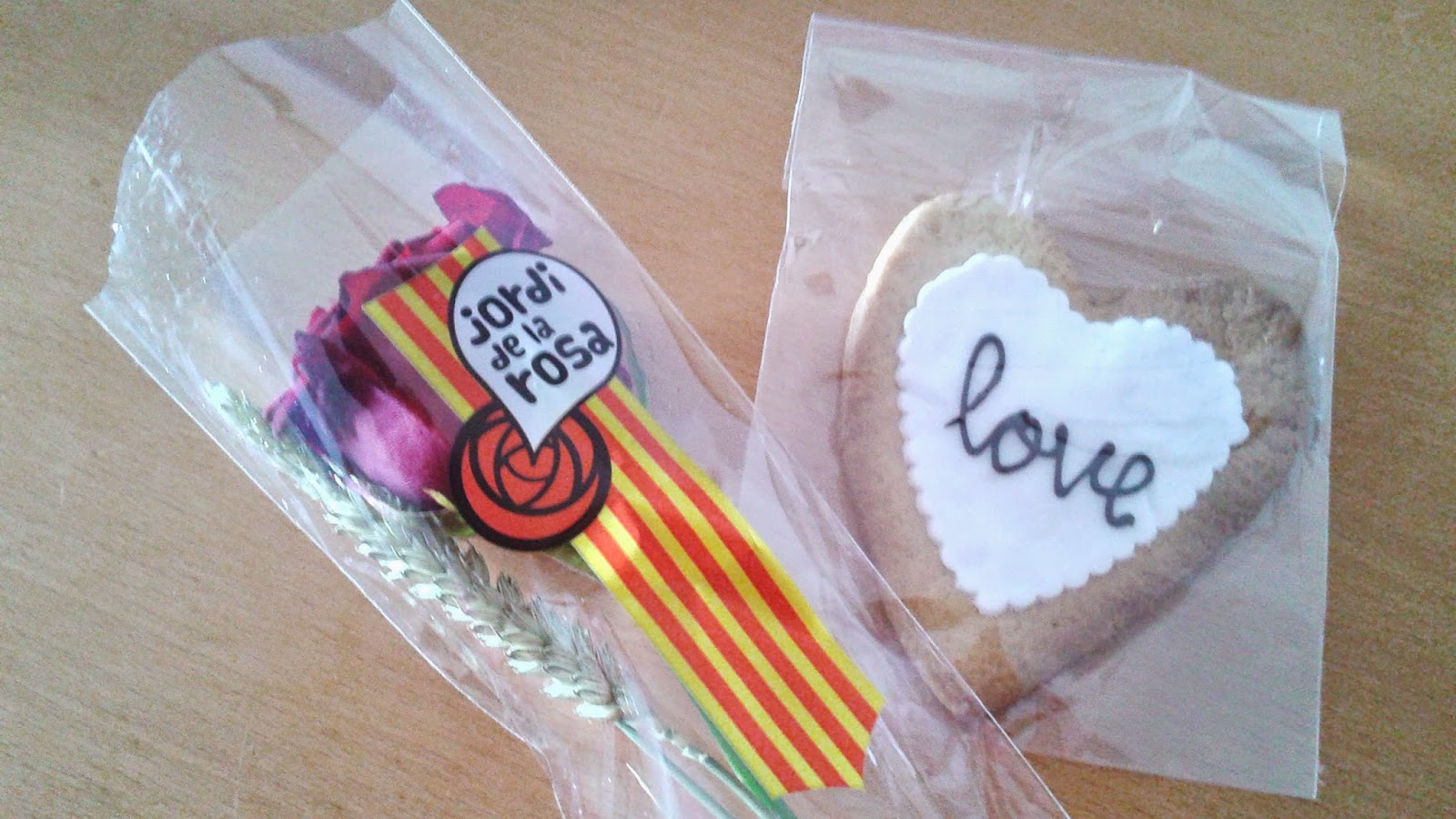 There is also a special bread for the day and lots of  baking  - as seems to be the case for every holiday here :) It's the one on the right with red and yellow stripes - the red is meat, and the yelllow is cheese. Of course, as a vegetarian, I got the dessert version - strawberries and pineapples with custard on bread...mmm 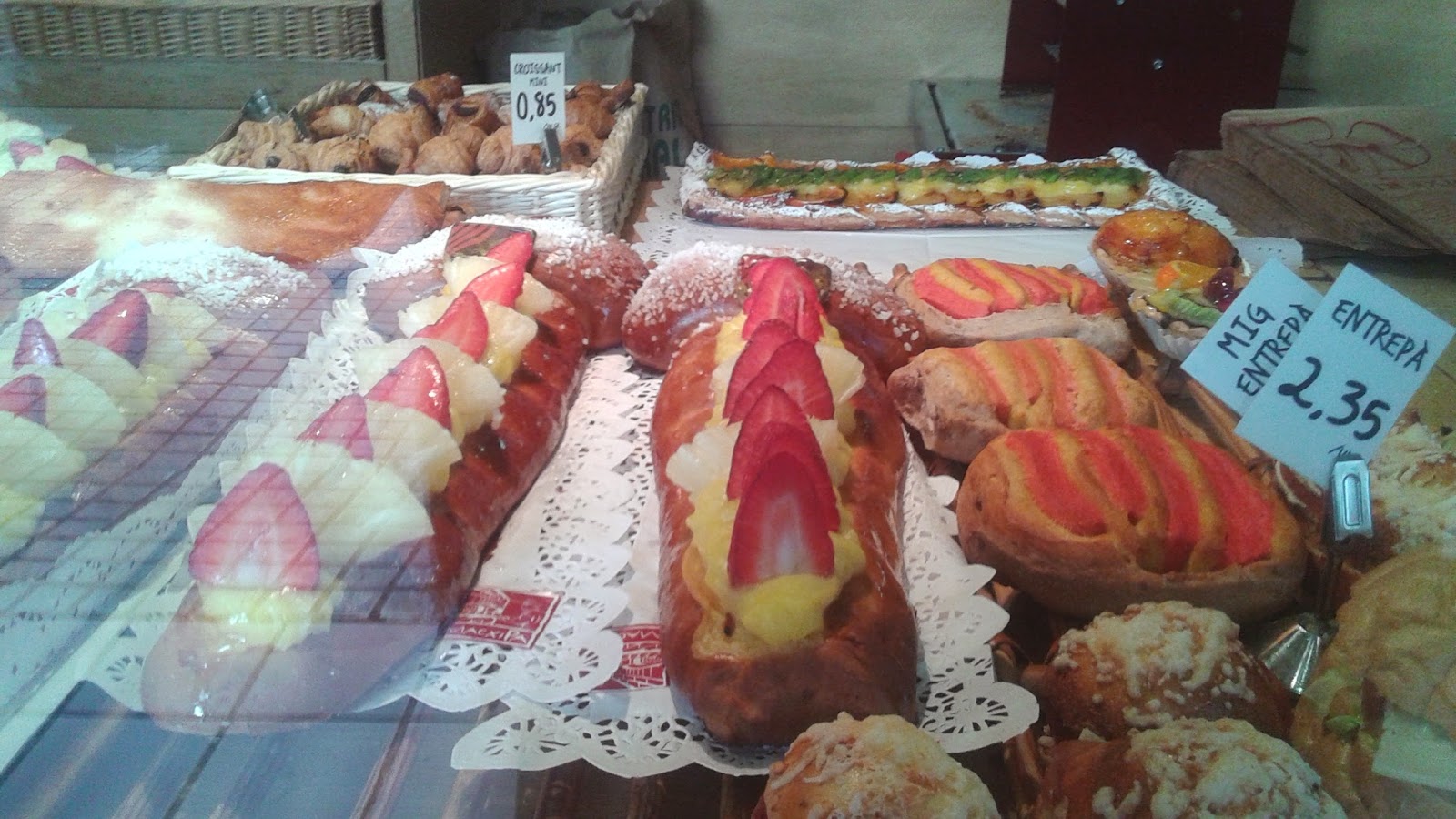 Las Ramblas, the main street in the centre of Barcelona,  fills with kiosks from booksellers, with everything from bookstore chains to local sellers selling books for just a few euros.  Luckily, I was able to walk down Las Ramblas from Universitat to Drassanes escaping most of the crowd in between going to Spanish class and going to work. Apparently it gets so busy in the evening you can barely move. 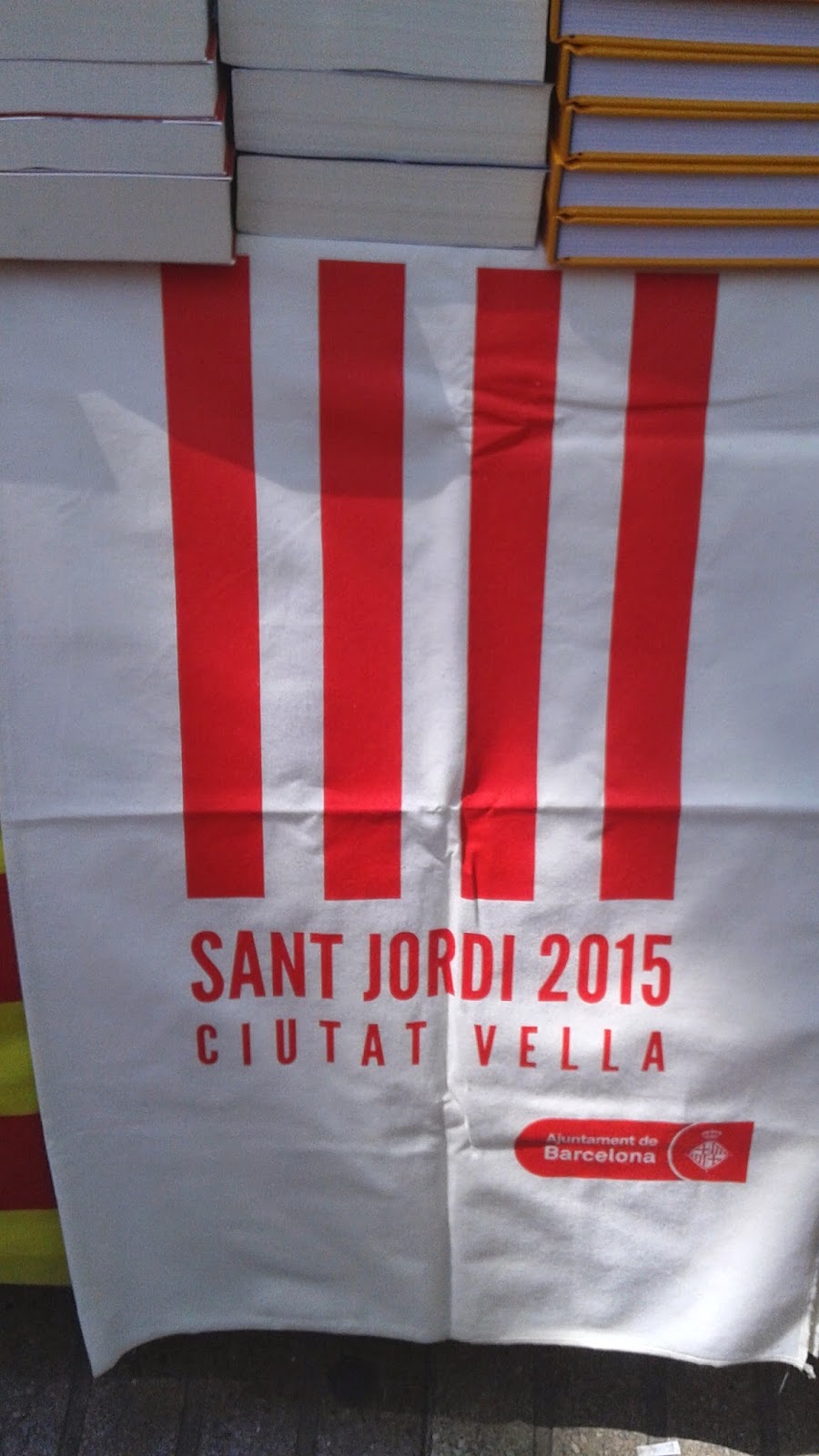 A lot of people have started sending virtual books to people they care about that live a little further away, and virtual bouquets of flowers, too :) I cheated a bit and bought myself a rose at half price towards the end of the day, to make my virtual roses more real.  I also bought myself a book - a beautiful, antique looking book on Mozart's life, in Spanish. I can't wait to read it, which I will likely do on my next train and plane rides, not too far away.

So, why roses and books? The Legend with an Unexpected Twist:

The legend of St. Jordi's says that a dragon once attacked a kingdom and the king decided that one of his unlucky subjects, the townspeople, needed to be sacrificed each day so the dragon would not attack more people; he had made a deal with the dragon.

One unfortunate day, the unlucky winner of the draw turned out to be his daughter, the princess. He begged the dragon to take all of his money instead, but the dragon refused. The king resigned to the fact that his daughter would be killed. At the moment the dragon opened his mouth to swallow her whole, a knight in shining armour stabbed the dragon and rescued the princess. It is said that roses grew around the dragon's dead body.

The king asked St. Jordi to marry the princess and take half his kingdom. The knight said nothing at all and rode off into the distance. This is why women receive roses from men. The fact that the festival combines itself with an important literary day makes it so special for me. The last line of the legend says:

Legends do not need to make sense. They just need to be beautiful.

I love Barcelona :) Feliz St. Jordi's!
Posted by Sapna at 12:30 AM
Email ThisBlogThis!Share to TwitterShare to FacebookShare to Pinterest
Location: Barcelona, Barcelona, Spain