London Fun: Four Days Back in My Favourite City

Four days in London was the perfect break to my hectic life. Andrés and I flew off to my favourite city Thursday night and arrived, an hour later than planned, to the Swiss Cottage area of the city. I would definitely recommend staying there. It's on the Jubilee Line and is in a cute residential area with great English breakfasts for you meat-eaters. We were at Avoca House Hotel, a simple but budget enough bed and breakfast. Andrés had never been to London before - yes, really! - so I was in planning euphoria and took him to see all the sites.  We started with the London Eye - which closes at 9:30- we barely made it! The timing was absolutely perfect, as we got on at dusk and it was dark out by the time we stepped off

Friday night, after a whirlwind four hour walk down the Thames and to all the tourist sites, Andrés and I met up with Alexandra and Alex to see a beautiful play. I read The Curious Incident of the Dog in the Night-time the month before and I would never have imagined they could do such a good job interpreting the story. Basically, it's about an autistic boy, Christopher, and his emotions, and the challenges he faces in daily life. The opening scene shows him finding his neighbour's dog, dead, on the front lawn. His response is emotional and he cannot control the noises he makes - this leads him to be a prime suspect in the murder. As a smart kid who loves prime numbers and puzzles, he sets off to find the identity of the murderer - and other secrets. The way his emotions are portrayed is phenomenal. Spend the forty quid and see this amazing play.

Andrés actually took all the photos - so here is the slideshow I made of them:
If you are an Android user, please note that Flickr uses flash, so you won't be able to see them on your tablet/phone...click  HERE instead to view the photos; you can click on the first one and flip through. 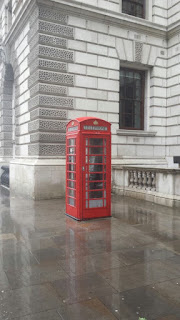 We may not be back right away -- Marrakesh is next on the horizon --but we will definitely be back to see another play, or even a musical together. London's energy is unparalleled --- it was the perfect four day escape from reality. Now, off to an intense six weeks of long days planning and executing my pilot study, cramming for the DELE B2 Spanish exam and hitting the gym. Then, it's off to France with Sean and Kristin for another week long break in Bordeaux. Hasta pronto :)
Posted by Sapna at 12:09 PM
Email ThisBlogThis!Share to TwitterShare to FacebookShare to Pinterest
Location: London, UK