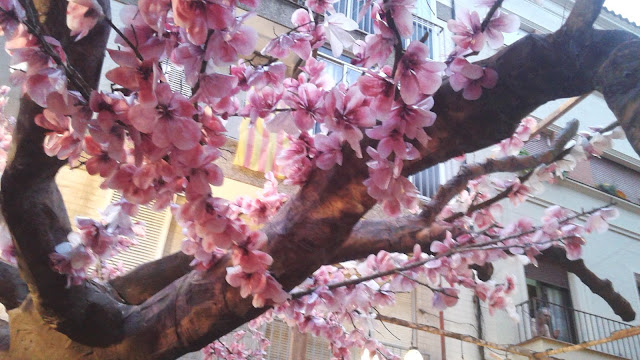 Festa Major de Gracia is the biggest summer festival in the city, so Anna G, Cristina and I decided to check it out on Thursday, the second last day. Neighbours who live in 18 streets in Gracia, most likely via a neighbourhood organization, choose a theme and create a fantastic display outside their apartments and balconies, above the tiny, winding streets of this beautiful and historic neighbourhood. The link to the festival above shows the advertisement posters for each street, if you'd like to check them out! Gracia is a bit of an artsy neighbourhood - where I took my art class at Espai Medusa actually - so it's a perfect fit.

Carrer Verdi, which displayed a beautiful Japanese theme this year, has won first prize 9 out of the last 13  years the festival has been running, this year included.  The runners-up were Carrer Fraternitat, with a monster theme and Sant Antoni, with a Paris theme - I don't remember now if that's the same one that had Moulin Rouge or not - but the reanactment of Moulin Rouge was artistic. Carrer Mozart won for best use of recycled materials, which was also beautiful.

Next year I will definitely visit all the streets, bring my proper camera (looks like my mobile camera has now officially died and will not take photos anyway), and attend the festival on the first day when the displays are new and have not been trampled through by thousands of people ---and on the last day, when they apparently have a fireworks in the street type of display where you should wear old clothes, because you are likely to get them singed by sparks. 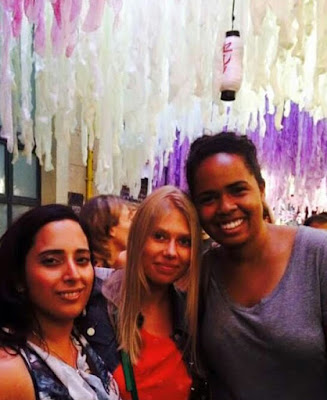 One of my favourite aspects of Barcelona is the different neighbourhoods - they actually seem like mini-towns or cities; it's like Barcelona is a city of mini-cities, all with their own style. Apparently there are festivals in different neighbourhoods too, but I have yet to check them out.  Festa Major de Sants is going on now, and it's only a 10 minute walk from my house, so I'll have to walk over there with Kiara and see what we find. I promise that next year's post on Festa Major de Gracia will be much better - and include a slideshow of all the streets!

I love living in Barcelona. Mental note: Do not plan to actually get any PhD work done in August.  This "the whole city is on holiday" atmosphere is much too contagious. There are guilty piles of pilot data analysis which absolutely must be done before my real data collection the weeks of September 14th and 22nd - on my desk (well, on my figurative desk - memory sticks and computer files are more like it).

Don't worry, you haven't missed the "special event" I've been on about...it's on Tuesday (a birthday surprise for someone who could potentially be readng this, so my lips are sealed until my next post ;)

Stay tuned!
Posted by Sapna at 8:50 AM
Email ThisBlogThis!Share to TwitterShare to FacebookShare to Pinterest
Location: Barcelona, Spain