Sunset Picnic at Montjuic Park with My Lab: A Beautiful Sunday 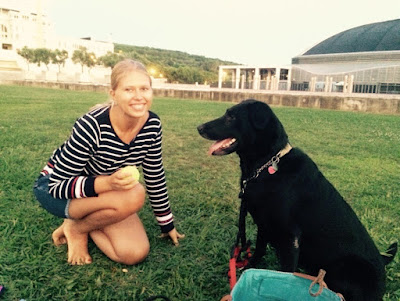 Last Sunday evening, Anna G and I decided to take Kiara to Montjuic park for a sunset picnic. Just a few minutes walk from Placa Espanya, this is a gorgeous park that is mostly known to tourists for its magic fountain, which I'll get to at the end of this post. When Sean and I went to Montjuic in early June during the day, it was nearly empty. Anna and I were also surprised at how few people there were around 8pm on a Sunday.

Here's a tip:  Don't be lazy, and take the stairs as far up as you can go.  It's like a mini-city up there. We stopped at the fields outside the Olympic Park, where Kiara actually PLAYED BALL. She hasn't done that all year and I thought it was because my little baby is almost six and just didn't want to run around like crazy after her CCL - Canine Cruciate Ligament - leg surgery  in England last year. It turns out she just needed REAL fields, not the small parks that are surrounded by roads and beaches and cars and too many people. She was chasing and fetching and returning the ball like a little puppy :) I love my pup so much...I am SO lucky to have her, and the best part of summer is having more time to spend with her. By the way, this is how K drinks water: straight from the  1.5 litre water bottle...it was empty fast!!!
We had a fairly healthy picnic - Anna made potatoes with herbs, and I made a chickpea spinach tofu salad; we had a bunch of fruit for dessert, which Kiara eagerly waited for! Oh, and wine, of course. We are in Europe - wine is a given!!!

Okay, so the part about Montjuic's Magic Fountain -the tourist trap that is beautiful, but just TOO full of tourists. It's a colourful fountain show that happens Thursday-Sunday evenings at 9pm from March to October , and Fridays and Saturdays the rest of the year. I had seen it several times already, but this time, we just happened to be walking Kiara down the hill when it was on.  It is a MUCH better view from up there and there are no tourists tripping over their own feet trying to take pictures in the dark!!! It's also very romantic with the lights and the night view of the city, so I've mentioned it to Andrés and we'll definitely be doing a sunset picnic here in September, once I return from the two weddings, day in the English countryside with Juliet  - remember when we had a  girls' weekend at Juliet's parents' Tudor home in Bury St Edmunds?- and seeing Benedict Cumberbach in Hamlet in London with Alexandra.


I will have to get pilot data analysis done before I leave in a couple weeks - eek that will be a crazy week - but so far this summer has been amazing. Stay tuned for a special event - now moved to the 25th - that I'll definitely have an incredible update post on!!!
Posted by Sapna at 5:25 PM
Email ThisBlogThis!Share to TwitterShare to FacebookShare to Pinterest
Location: Barcelona, Spain