One of the best surprises of 2015 was Kristin's visit to Barcelona for New Year's Eve.  What a spectacular, last minute surprise!

Kristin arrived on December 31st in the afternoon - despite several attempts, I still hadn't managed to find an affordable New Year's Eve dinner menu  (affordable meaning less than 135 euros each....)  I had hoped to take Kristin to Mount Tibidabo, as the rooftop/terrace restaurants there are one of the best parts of Barcelona - but, of course, the regular 50 euro menus turned into 150 to 200 euro (per person!) menus on NYE.  Kristin, you are going to have to come back in the summer to visit me and see the spectacular views on a rooftop terrace!

So, Thursday afternoon we headed to Vinalium to pick up wine to start with, and finally found a 55 euro menu that was seafood free for Kristin and meat and seafood free for me - at  La Dolca Herminia.  We had an excellent salad (with lychee!) and a beautiful mushroom risotto as the second course. The third course was a bit less enthralling - maybe because we were full. Kristin had steak and I had a soy burger patty with veggies. Dessert was also a bit disappointing - it was a square that had a burnt chocolate taste (which we think was on purpose...) - I must say the cinnamon icecream was great, though! We were also given 12 grapes to put in our mouths with every ding of the midnight clock bell, as per the tradition.

Dinner started at 9:30 pm (of course...), so we ended up having to leave early (11:15pm) to rush to catch the fireworks. We only made it to Plaza Espanya tho (a good enough view) - making it all the way to the Magic Fountain was impossible! It was a great way to ring in 2016 though!

On New Year's Day, Kristin and I opened the second bottle of delicious wine and had a wonderful, college-student like night of Netflix, Pizza and Wine.  Here are the two amazing wines that we picked out (Castillo de Monesma Crianza & Miquel Jane's Sauvignon Blanc, with the help of the salesperson. Both of them were about 15 euros in total - which is super expensive for Spain.  I LOVE the wine culture here! 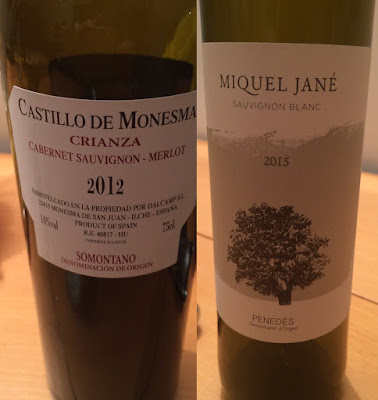 Since my favourite pizzeria, Eccola was closed because of the holiday, we spent over an hour finding a delivery pizza place that was actually good (I've tried a few and they are NOT Italian pizza). Kristin found one called Gusto Pizzeria - and it was amazing. It's on Justeat.es, so make sure you try it!   We watched Hilary Swank's You're Not You, an incredible film about a pianist who gets ALS and the teenager she hires to take care of her. It's so amazing to have friends come visit!


Perhaps one of the best surprises was that Sean and Kristin had planned together (even though their visits were separate!) to surprise me with this lovely, red Nespresso machine - and 200 capsules (which arrived yesterday). My favourite flavours so far are Kazaar, Dharkan, Vanilla Cardamom, Vanilla Amaretto, Caramelito & Arpeggio (the latter because it reminds me of the family I stayed with in Morges, in 2004).

I am in love - such beautiful flavours of varying intensity, a stunning colour machine, recyclable capsules, beautiful accessories and, a visualization of the next country where I will live -  Switzerland!!!  They have well-resourced universities, linguistics researchers, mountains, nature, SALARIES you can live on, a multilingual context - and hopefully, by the time I get there, a few of my friends.

Thank you so much for visiting me, Sean and Kristin - and for the lovely gift. I am so lucky to have the best friends in the world. Happy New Year, everyone - and Feliz Reyes (Three King's Day) for those of you in Spain!!!