Beautiful Coves of Blanes: A Day Trip to the Costa Brava

Sunday's day trip to Sa Palmero, Blanes on the Costa Brava was a beautiful experience. I spent hours on the cove, photographing beautiful lovers against the sun-glistened sea, reading artistic graffiti, admiring carved love locks hanging from the rails, and watching the waves crash against the shiny rocks. The cove combined with sandy beach around the corner is the perfect combination for a blissful Sunday.

I can't believe I live an hour and a half train ride from this beautiful gem; the colour of the sea is spectacular! Every time I discover a place like this, it motivates me to find a way around the horrible Spanish economy and terrible state of jobs in academia here, and develop a successful life in Barcelona.

The reason for my "coves" photoshoot was actually twofold - to have a relaxing day away, and also to photograph background photos for my new blog, which is coming soon!  (Don't worry, The Singapore Lizard isn't going anywhere, but stayed tuned for an exciting new addition to my creative pursuits!)

The photoshoot definitely tells the story best, so I'll leave you to enjoy the slideshow below. Please remember that if you're using a mobile device not compatible with Flash, you'll need to click on my Blanes Beautiful Coves on the Costa Brava Flickr Set here, click on play in the top right hand corner (or click on the first photo and flip through). Enjoy!

Posted by Sapna at 11:35 AM No comments: Links to this post
Email ThisBlogThis!Share to TwitterShare to FacebookShare to Pinterest
Location: 17300 Blanes, Girona, España


One of the best parts of summer is spending more time with my beautiful (seven year old) puppy, Kiara. It is incredible not to have a 60 hour a week schedule and just chill with her while I plan my new blog venture (don't worry, The Singapore Lizard isn't going anywhere; I'm just working on another project, too. Stay tuned!) 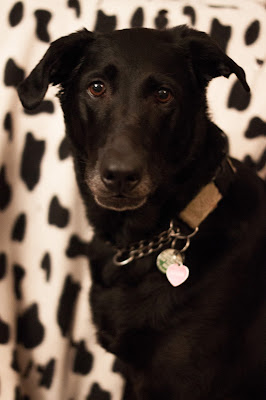 So, although Kiara would love the beach in the summer, and would probably try to jump in the waves, Barcelona is very limited in allowing dogs on the beach in the summer. I guess that's fair enough given all the tourists - but it'd be nice to have a few dedicated beaches that you can actually access by train.  I found a few online on the Costa Brava (a few hours north), but most aren't accessible unless you have a car.  There's one in Sitges called Cala Vallcarca, but apparently it's "surrounded by a cement factory", which ruins the view (according to Animalados). So, we headed to Montjuic Park on Monday instead, and finished up the photoshoot with indoor portraits last night.

So, why do I call her "puppy"? She's smart and absolutely hilarious with the child-like stunts she pulls, like dragging my IKEA kitchen trolley from the kitchen to the sofa, and helping herself to the spice bottles she thinks smell the best.  Or, helping herself to her leash and harness (which are located on a coat hanger that I can barely reach!) and hanging out with and chewing them on the sofa while I'm at work. Or, as I realized while setting up a mini strength training circuit at home before taking her for a run last Saturday, thinking that working out is THE BEST game ever.  She followed me around excitedly for every rep, and my "break" in between sets ended up being a few second game of tug-of-war with Kiara!

Another example is her insistence on finding and removing the squeaker in every squeaker toy. A couple days ago I bought her one that had a full squeaker ball, not just a teensy squeaker inside a moose toy. This is her face of frustration after neatly amputating the moose's leg in vain (the squeaker ball remained inside for one whole extra day before she figured it out!)

Anyway, below is the slideshow of the handful of portraits that turned out (after over 75 shots).   Please remember that if you're on a mobile device that doesn't support Flash, visit my Kiara Portraits Flickr Set Page here, click on the first photo and either flip through or press play for the slideshow. Enjoy!

Posted by Sapna at 11:25 AM No comments: Links to this post
Email ThisBlogThis!Share to TwitterShare to FacebookShare to Pinterest
Location: Barcelona, España

While I have to admit Genova (Genoa) wasn't my favourite city - I was expecting a lot more beauty than the industrial look it has - it definitely had some incredible food.  Sean, Kristin and I stayed in a lovely Airbnb again - this time, just steps away from the city center. We managed to park in Marina Parking a few minutes' walk away for 10 euros a day, too!

Genova's rooftop views reminded me of Barcelona's - but not quite as pretty. I suppose I was expecting Genova to look at bit more like Santa Margherita, a beautiful town which we visited on our second day. It did have some streets that reminded me of the Gracia area of Barcelona, but others were quite non-descript. The food, however, made up for all that! Here are some recommendations (which we got from our lovely Airbnb host): 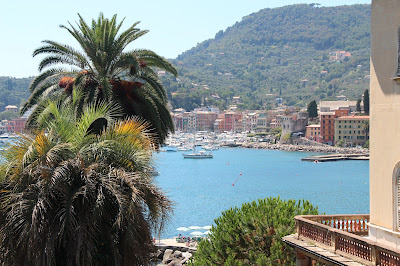 The walk to from Santa Margherita to Portofino was the best part of our trip. It takes about an hour (though guidebooks will tell you an hour and a half), and is truly breathtaking. Santa Margherita itself is a pretty little town and an excellent place to stop for gelato or freshly squeezed lemonade. We wandered the streets and then headed to Portofino, which is very, very touristy. You'll see the differences in the quality of the food, as well as the prices. Even my mediocre, no-cheese salad was 14 euros! I guess you're paying for the view though, as the harbour is beautiful. I love taking photos of boats so it was quite fun - and we decided to hop on a ferry on the way back to enjoy the cool breeze instead of venturing on another sweaty hour long hike.

We also had some fun sitting at a seaside cafe taking photos of divers and people with their pets - thanks to 300mm lenses!


Check out the slideshow of romantic, beautiful Santa Margherita and the walk to Portofino below! Remember, if you are on mobile device that doesn't support Flash, click here for my Flickr Genova Set page, click the first photo and click play or flip through.

Here's to more mini-Singapore reunions in the near future (perhaps I'll have some visitors during my research stay in Holland in a couple months... ;)  Stay tuned!


Posted by Sapna at 5:58 PM No comments: Links to this post
Email ThisBlogThis!Share to TwitterShare to FacebookShare to Pinterest
Location: Génova, Italia

Sean, Kristin and I decided on Italy for our road trip this summer - and wow, what a beautiful place to choose! Remember last year's trip to Bordeaux? Our road trip adventures were just too much fun, so a repeat was in order this year! Last Thursday I flew to Geneva and hopped into Kristin's car for a five hour drive. We decided to brave the Mont Blanc tunnel - instead of driving 100 km around - which resulted in a 2 hour traffic jam - and a lot of catching up of events in our lives over the past year. 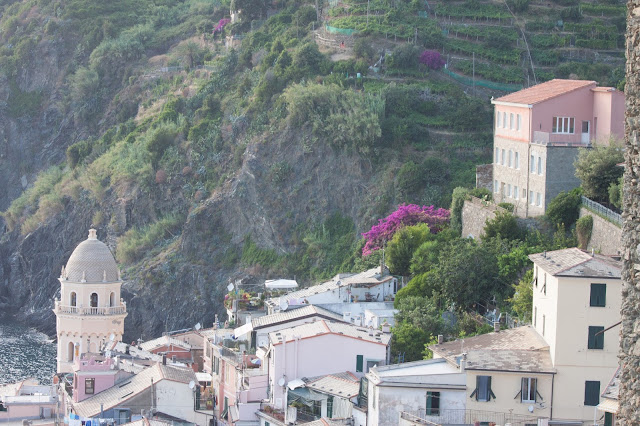 Levanto, and our cute Airbnb on top of a hill above town, was itself an amazing surprise. Booking accomodation within the villages themselves is quite an expensive endeavour, so most people stay in Levanto or La Spezia. We arrived late, expecting to have dinner on Spanish time - y'know, around 11:00 - and it turned out the Italians eat a couple hours early and were closing by then!  Lunch is at noon or 1:00, not 2:00 or 3:00, and dinner is at 8:00 or 9:00pm, not 10:00 or 11:00pm.  We managed to entrap ourselves in this Spanish-Italian difference quite a few times. Nevertheless, we found some amazing eats:

We spent our first full day in Levanto on the beautiful beach and the next day village-hopping by foot and fast, but veeerry late trains. Unfortunately one of the main hiking paths between the villages was closed due to bad weather, so we only hiked a gentle couple of hours and were then stuck waiting for trains the rest of the time. 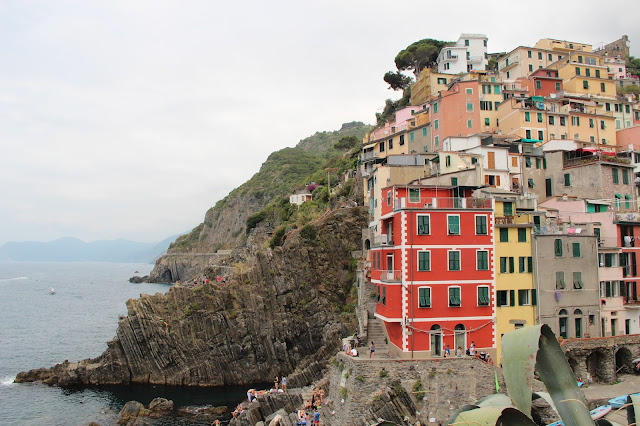 One of the best parts was standing by the sea, watching people cliff-diving.  My favourite photo of the trip is the one below, where I managed to capture this girl mid-air, arms back, as if she were flying into the water.


Check out the slideshow below of the beautiful Cinque Terre villages- Monterosso al Mare, Vernazza, Corniglia, Manarola, and Riomaggiore.  Photo credit to Kristin for a few of the Cinque Terre photos she took from the boat, which I included in the show:)  Remember, if you are on mobile device that doesn't support Flash, click here for my Cinque Terre Flickr Set page, click the first photo and click play or flip through.


Well, here's to even more mini-Singapore reunions in the very near future!  Stay tuned for my next post on our visit to Genova, Santa Margherita and Portofino the day after we left Levanto - coming up shortly!
Posted by Sapna at 5:07 PM No comments: Links to this post
Email ThisBlogThis!Share to TwitterShare to FacebookShare to Pinterest
Location: Cinque Terre, Località Serra Mereti, 19015 Levanto SP, Italia
Newer Posts Older Posts Home
Subscribe to: Posts (Atom)